Ceann Comhairle has accused Opposition parties of trying to undermine him 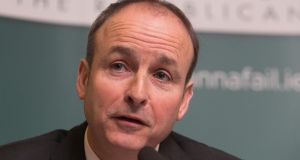 Fianna Fáil leader Micheál Martin has called on Ceann Comhairle Séan Barrett to withdraw comments “questioning Fianna Fáil’s motivation” if he is to retain the confidence of his party.

Mr Martin was reacting to comments made by Mr Barrett on RTÉ Radio this morning, in which the Ceann Comhairle accused the main Opposition parties of being out to undermine him.

Mr Barrett has said his decision to rule out a Dáil debate on the creation of a commission of inquiry into allegations of Garda malpractice was not influenced by a letter from former minister Alan Shatter.

However, Mr Barrett did allow the motion go through without a debate, which effectively did not accede to Mr Shatter’s request.

He said that he took the decision for the motion proposing the commission to be put to the house without debate so the investigation could go ahead immediately.

In a statement, Mr Martin said the Ceann Comhairle “made a series of extraordinary comments on RTÉ Radio, including a completely unjustified accusation that Fianna Fail has been seeking debate because we are attempting to undermine Deputy Barrett”.

“This charge will not go unchallenged,” Mr Martin said. “In addition, he sought to dismiss the substance of the issue, claiming that the terms of reference are a technical issue and that stopping the debate simply aided a speedier start to the inquiry.

“Fianna Fáil’s motivation in objecting to the way the Dáil has been treated this week is simple - we believe in the primacy of Parliament and we reject the idea that legitimate debate should be blocked.

“If the Ceann Comhairle wishes to retain the confidence of the Fianna Fáil Party, he must immediately withdraw his comments questioning Fianna Fáil’s motivation and address the legitimate concerns we have raised.”