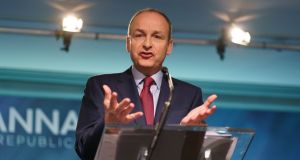 Fianna Fáil leader Micheál Martin promised to deliver solutions to the State’s health and housing problems, which he said Fine Gael had failed to address, as he launched his party’s election campaign.

Mr Martin said the Fine Gael offer was to provide “more of the same for the next five years” but that Fianna Fáil would lead a new government that understood Ireland’s issues and how to solve them.

“We are campaigning for change,” he told reporters in Dublin on Wednesday.

Mr Martin did not go into specifics about his party’s plans to address capacity problems in the health service, the housing shortage, the cost of childcare or respond to climate change, but said it would publish detailed proposals during the election campaign.

He said the “core difference” between Fianna Fáil and Fine Gael was that his party would “deliver” solutions to these challenges.

He confirmed that Fianna Fáil would also include a package of proposed tax cuts in its manifesto, but insisted that these and any social welfare changes would be “progressive and sustainable”.

Asked if he could be a credible candidate for change, Mr Martin said that in every department where he had been a minister, he had brought about change, and also that he had led change in establishing the confidence-and-supply model for the outgoing Government.

He said the Fine Gael-led Government had failed to deliver on many of the reforms agreed with Fianna Fáil but that “we will deliver” if in government.

Mr Martin declined to be drawn of his expectations for the number of seats Fianna Fáil will win but said that he expected to exceed the 44 TDs elected in 2016. He confirmed that the party would not contemplate a coalition deal with Sinn Féin and said it would not form a government with Fine Gael either.

He said Fianna Fáil had been “responsible” during the last Dáil term.

“We have done what’s right for the country rather than what was politically advantageous,” he said.

Mr Martin said Fine Gael should “stop the silly attacks” on him and on Fianna Fáil over Brexit and said that the party’s MEP Billy Kelleher would vote for the EU-UK Withdrawal Agreement in the European Parliament. Mr Kelleher has said that he may not vote for the agreement because of concerns over the rights of EU citizens in Northern Ireland.

Asked about crime, Mr Martin said that people were shocked at the “depravity” of some recent incidents and said there is “a sense that we’re losing control of this as a State”.

“It demands a higher and more robust response,” he said.

Mr Martin said the focus of Fianna Fáil’s plans would be on investment in public services, particularly housing and health.

“We can’t do everything,” he said, “but we will deal with this housing crisis.”