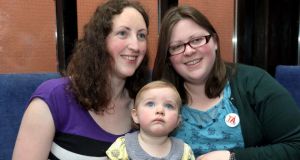 “So she waits for equality before she’s bothered to walk! ” her mothers Liz Quirke and Yvonne Hennessy exclaimed.

The couple, who live in Spiddal, had found the only quiet corner in Galway’s Blue Note bar, which was heaving with happiness as the official celebration venue for the Yes Equality campaign.

“Spiddal voted 60 per cent yes, so did most of Connemara – it’s the end of old Ireland, ”Ms Quirke declared. Just one Connemara box had bucked the trend, she noted –Recess had “59 no, 58 yes and one spoiled vote!”

Out in the main bar, roars of approval were punctuated by collective groans as RTÉ television broadcast the reaction from both “Yes” and “No” campaigners in the capital. There were ecstatic cheers as former Fianna Fáíl justice minister Máire Geoghegan-Quinn, who had legalised homosexuality back in 1993, appeared on the big screen.

“But where was Fianna Fáil in this campaign - invisible – and that will be remembered,”John Quinlivan from Ennis, Co Clare, and several of his supporters noted. “The party seemed to have no presence on the ground whatsoever.”

“We had 20 year-olds and 70 year-olds canvassing, and that’s what was so amazing,”Mr Quinlivan said.

” I was called a paedophile, one man came at me with a chainsaw, but 75 per cent of the reaction was positive and now we have all this collective love...”

Yes Equality Galway co-ordinator Niall Ó Tuathail said that “knocking on 45,000 doors between here and Clare and Roscommon” had paid off.

Nuala Ward, who organised Galway’s first “Pride” parade almost 26 years ago, said that she believed those who voted “no” were trying to “re-ignite an attitude and an ideal type of family that doesn’t exist”.

Dr Dilis Clare, who was in the Blue Note with her partner Laura O’Connor, said that the outcome reflected a national “kindness and generosity of spirit”, and one which would also benefit children of gay couples .

Sipping a pint by the door was Connemara publisher and businessman Liam Stenson.

“I am here for my son, Jack, who came home to vote,”he said. “He’s getting married in July 2016 on the tenth anniversary of his first date. I’m 63 years old, and I never thought I’d see this day.”