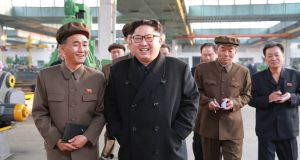 Taoiseach Leo Varadkar has said he will not be sending anyone to the airport to stop Ministers travelling to North Korea.

Three Independent Alliance Ministers have sought a visit to the country in an attempt to discuss peace.

Speaking on Monday, Mr Varadkar stressed there would be no State visit but said he could not prevent them from travelling.

“There isn’t going to be a Government mission to North Korea. The Minister for Foreign Affairs has been very clear on that,” he said.

“I am not the keeper of any of my Ministers, so if they wish to travel to North Korea I am not going to be sending anyone to stop them at the airport, but certainly it won’t be a Government one.”

Minister for Transport Shane Ross, Minister of State with responsibility for disability Finian McGrath and Minister of State at the Department of Business John Halligan have sought permission for a parliamentary visit to North Korea through the embassy in London.

The embassy has made contact to invite the three Ministers to discuss a potential visit and the Independent Alliance members are expected to travel to London.

Minister for Foreign Affairs Simon Coveney has sought to meet the Ministers to discuss the visit. However the meeting is not due to take place this week as Mr Coveney is in Africa.

The department has already outlined its opposition to a parliamentary visit by the three Government members.

Mr Halligan has stressed the three would pay their own way and the visit would not take place during Dáil time.

Mr McGrath has said the three Ministers have been “ridiculed and vilified” since their proposal came to light.

North Korea’s nuclear and missile programmes have led to increasing tension with US president Donald Trump, and an international sanctions regime against the country is in place.