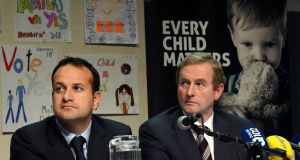 Minister for Health Leo Varadkar has strongly backed the leadership of Taoiseach Enda Kenny despite accepting that Fine Gael was resoundingly defeated in the general election.

The Fine Gael TD said on Friday that “all key Ministers” in the party were “fully behind” Mr Kenny and had given him a mandate to try to put together a government.

The intervention will be seen as significant as Mr Varadkar is one of those most mentioned as a possible successor to the Taoiseach, should he step down as party leader. There are doubts about Mr Kenny’s position as leader following his party’s poor election performance when it won less than a third of the vote share and only 50 of the 158 seats.

Dismissing his own status as a potential leader in waiting, Mr Varadkar said: “Enda Kenny is our nominee for Taoiseach. We have given him a mandate to try to put together a government and in doing so he needs to know his key lieutenants, his key Ministers, the Ministers he raised up and appointed to Cabinet are fully behind him and they are.”

He added: “The vast majority view even from those who have fallen out with Enda Kenny is the election was a defeat but not a rout.

“We are the biggest party and Enda Kenny deserves our full support in trying to form a government. There is no way he can do that if he feels if he can’t trust the people behind him or has to look over this shoulder.”

During the interview, Mr Varadkar strongly indicated the only workable arrangement that could emerge out of negotiations around forming a government was a minority Fine Gael administration with support from Fianna Fáil.

However, firmly ruling out any ad hoc arrangement he said it could only work if the administration was stable and if it reflected the principles and values on which Fine Gael had fought the election.

He accepted it would be difficult and there was a question of a lack of trust between both parties, although their differences on policy issues was less yawning than with other parties. He categorically ruled out the idea of a ‘grand coalition’.

“We are interested in forming a government with like-minded parties. That government has to have two characteristics. It does have to be stable. We ran an election campaign on the basis that the country needs stability,” he said.

“We feel very strongly about that. You can’t have a government that will collapse in three or six months. Public servants pull back The vested interests wait you out.”

Saying such a minority government would have to be based on “some agreement that would hold”, Mr Varadkar also said it had to reflect Fine Gael policies and principles.

Asked would it have to be Fianna Fáil, he replied there were other possibilities but all were intrinsically unstable. “If you add up the numbers it you could have us, Labour, the Social Democrats, the Greens and the independents.

“That would be difficult though. It would be quite narrow…

“The other is some form of arrangement with Fianna Fáil. We are not willing to enter into a minority if it’s not one that will last and be stable. There is no point in collapsing in three months or six months.”

Asked could Fine Gael work with Fianna Fail, he said it was happening in local authorities and there was the precedent of the Tallaght strategy, where Fine Gael under then leader Alan Dukes supported the Fianna Fáil minority government between 1987 to 1989.

On the question of coalition, he said: “I do not see that happening. I do not see a willingness from either party to put together a coalition.”

On water charges, he said compliance with the EU water directive essentially made it a red-line issue and there could be no going back to removing charges. However, he did accept that Fianna Fáil policy of delaying charges accommodated the EU strictures.

He accepted that the party’s communication strategy, and its slogan, had not been successful and that in his constituency he had specifically changed the message on the recovery, to “humanise” it more.