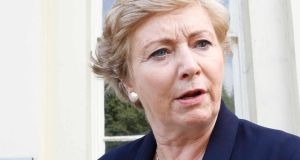 Amendment to be brought to Cabinet by Frances Fitzgerald and Ruairí Quinn. Photograph: Sasko Lazarov/Photocall Ireland

The Government is set to pass an amendment to employment law to ensure religious-run schools or hospitals cannot dismiss staff on such grounds as being a lone parent or a divorcee, or on the basis of sexual orientation.

The amendment to the Employment Equality Act is to be jointly brought to Cabinet by Minister for Education Ruairí Quinn and Minister for Justice Frances Fitzgerald.

While work has been ongoing on the legislation for some time between the two departments, it is expected to be brought to Cabinet on Tuesday week.

Mr Quinn has already pledged to repeal section 37 of the Employment Equality Act 1998 to eliminate legalised discrimination against lesbian, gay, bisexual transgender (LGBT) people in the education and healthcare sectors.

Once Mr Quinn and Ms Fitzgerald’s proposals are approved by Cabinet, it is expected they will be passed by the Dáil and Seanad in the autumn session, possibly by September or October.

Teaching unions and LGBT groups have long campaigned to have the legislation changed, and the Labour Party introduced a Private Members’ Bill in the Seanad on the issue last year.

The propositions being brought to Cabinet are largely modelled on the Labour Bill, proposed by Ivana Bacik in the Seanad.

The amendment will ensure that religious-run, or controlled, schools or hospitals can no longer maintain their general opt-out from anti-discrimination laws.

Under current law, educational or medical institutions controlled by religious orders and which promote religious values are not considered to be discriminating if they give favourable treatment to an employee or prospective employee “in order to maintain the religious ethos of that institution”.

This effectively allows for discrimination against those whose sexuality or family status, for example, is not perceived as conforming with the religious ethos.

LGBT campaigners have said it has led to a “chill factor” for lesbian and gay teachers, with many concerned about job opportunities and the prospects for career advancement.