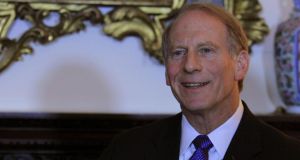 Former US diplomat Dr Richard Haass during a press conference at the Department of Foreign Affairs on St Stephen’s Green, in Dublin on Friday. Photograph: PA

The failure to establish a truth process into the Northern Ireland conflict encourages tribal myth-making, the Human Rights Commission has said.

An unresolved sense of neglect and injustice is triggering problems and wider society is suffering while a mechanism for recording actual memories is absent, departing chief commissioner professor Michael O’Flaherty said.

Former US diplomat Richard Haass is holding talks aimed at addressing the legacy of 30 years of violence and disputes over parades and flags.

Prof O’Flaherty said: “Some of our most vulnerable people remain at the margins, with inadequate acknowledgment of their suffering; many are dying without ever being able to share their stories of pain and loss.

“There is not a day that goes by without the unresolved sense of neglect and injustice triggering societal problems.

“The lack of a truth recovery process means that tribal myths will continue to trump actual memory.”

The views of unionist, nationalist and police or army victims of the violence and their political or civic representatives have at times led the political agenda in Northern Ireland for many years; most recently following the IRA commemoration parade in Castlederg and the Democratic Unionists’ decision to pull out of plans to build a peace and reconciliation centre on the site of the former Maze paramilitary prison.

The DUP’s Stormont powersharing partner, Sinn Fein, has pressed for a South African-style truth and reconciliation commission to hear stories from the past in an all-encompassing fashion, including killings committed by members of the security forces, but some unionists have accused republicans of failing to come clean about their own alleged deeds, like Martin McGuinness’s role during Bloody Sunday.

The issue of an amnesty from prosecution for past wrongs is also in dispute, with many victims seeking justice for crimes committed.

International experts are also divided over the merits of truth and reconciliation processes and how to bring about true forgiveness in divided societies while avoiding reopening old wounds or reinforcing long-held preconceptions.

Last week a priest who comforted relatives of eight people killed by the Ulster Freedom Fighters in the Greysteel trick-or-treat pub shooting said opportunities had been missed and claimed people now will still be as narrow-minded as ever.

A consultative body on dealing with the past including former Church of Ireland primate Lord Robin Eames and Denis Bradley recommended a series of measures including one-off payments to victims but many of its proposals have been mothballed.

Prof O’Flaherty added that many of the traditional foundations of transitional justice, changing from conflict to peace, had already been installed.

“Much though remains missing. Crucial building blocks, such as those for truth recovery or the addressing of the needs of non-fatal victims of the conflict, have not been put in place.

“Most glaring of all has been the absence of an architectural plan for the overall construction.

“In other words, and despite such worthy efforts as that of the Consultative Group on the Past, Northern Ireland has never benefited from a coherent and integrated transitional justice framework.

“Our society is suffering by reason of these omissions.”