Labour will not take position on presidential age referendum 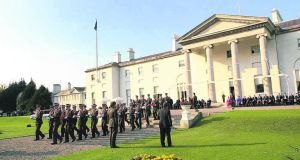 The Labour Party is not taking a position on the Government-backed referendum to reduce the minimum age for presidential candidates.

A spokesman for Fine Gael confirmed the party was supporting the proposal to reduce the age of candidates for the presidency from 35 to 21 in the poll being held on May 22nd.

However, a spokesman for Labour indicated the party would be focusing its attention on the same-sex marriage referendum, which is taking place on the same day, rather than the presidential age poll.

“We’re not taking a position on it. As a party we’re concentrating our campaigning firepower on making sure the Marriage Equality referendum is passed,” the spokesman said.

The Government spokesman strongly backed the proposition to reduce the minimum age for presidential candidates. “Ageism in all its forms should be challenged,” he said.

He said the Constitutional Convention had recommended the proposition should be put to the people.

The Constitutional Constitution was a forum of 100 people, representative of Irish society, with an independent chairman.

Reducing the eligibility age for the president from 35 to 21 was one of a large number of recommendations it made.

The principal argument advanced was that 35 was too high an age of eligibility given the voting age is 18, and the age at which a person becomes eligible to become a TD or senator is 21.

The president is the first citizen of the country and represents all citizens. The president also has specific constitutional powers including the power to dissolve the Dáil, and to refer Bills to the Supreme Court for decisions on constitutionality.