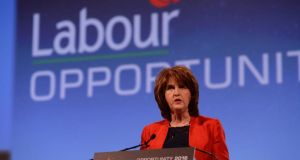 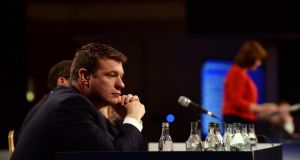 The Labour Party will speed up the process of getting the benefits of the recovery to every family in the country during its final year in office, according to party leader and Tánaiste Joan Burton.

Speaking at the opening session of Labour’s national conference in Killarney she said that once again, the party had risen to the challenge of rescuing the country in a dark and difficult hour.

“In Government, we’re driving an extraordinary economic recovery that is gaining real momentum. We’re getting our people back to work at a rate of 3,300 new jobs every month and wages are on the increase too,” she said.

“The shadow of crisis has passed. And a better Ireland is now firmly within reach. The Labour Party has been absolutely central to this turnaround. But we’ve much more work to do to secure the recovery and spread the benefits.”

She said renewed prosperity meant raising people’s living standards and that was the party’s job now.

“So we’ve begun the process of social recovery, of spreading the benefits of growth to every worker, every family, every pensioner. And we’ll speed up that process over our remaining year in Government.”

Ms Burton said 2014 was a tough and turbulent year for the party but there was now a clear path to revival.

She said her twin objectives as leader were to build a social recovery delivering opportunity for all and to achieve a second successive term in Government for the first time in Labour’s history.

The Tánaiste listed 10 political achievements she said she was most proud of. Among them were raising the minimum wage, protecting pensions and other core welfare rates and legislating for the X case. However, she said the party had plenty more to do.

She said that it was now almost 40 years since the Irish people last elected a single-party government and coalitions were now firmly part of the political landscape. “So our task is not to win a second term alone. It is to have sufficient strength to make our presence felt - just as we have done in this Government.”

Ms Burton said that when Labour went into government in 2011, she thought it would take the whole five -year term to extricate the country from the “mess” created by Fianna Fáil.

“In fact, it took less than three years. We bid the troika goodbye and exited the bailout. We shut down Anglo and tore up the toxic promissory note.

“And thanks to superb work by Eamon Gilmore and Brendan Howlin, we renegotiated our debt burden to save tens of billions of euro.”

She said that in the original document agreed by Fianna Fáil and the troika, the projected cost for servicing the national debt this year was €11.3 billion.

“We managed to cut that by almost €4 billion. That is why in the Budget we were able to begin the process of raising living standards,” she said.