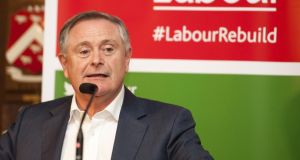 Labour party leader Brendan Howlin: “It’s seeing everything through the righteousness of your own country and the awfulness of the foreigner.” Photograph: Dave Meehan

In an extraordinary criticism of the institutions that oversaw his own government’s bailout, Mr Howlin said the lack of generosity shown by the EU worsened the crisis in Greece and added to the rise of populist right movements.

In an interview with The Irish Times to mark the first six months of his leadership of Labour, Mr Howlin also says he is optimistic about the future for his party, and insists the party is willing to join forces with any other party or grouping which shares its social democratic values.

Mr Howlin has said he believes the next crisis facing Europe is not economic but political. He has traced part of the reasons back to the attitude of the same EU institutions on which he and the the former coalition relied during the bailout programme.

“It’s the hollowing out of the centre. I had that debate with the troika when they were here all the time. If they repeatedly demanded burdens that were unacceptable to the people, they would pull down the centre of politics in Europe and what would follow would be ugly.

“I don’t think the institutions of Europe have served the EU project very well during the crisis. They allowed what was a very manageable crisis in Greece to expand and obviously there was an international banking crisis that followed up on that.”

Mr Howlin asserted there was a failure to respond communally in Europe. “It eroded people’s confidence in the collective will of Europe to act in concert with the weakest in a way that characterised the building of the union.

“The union is a political construct. Sure, it started off as an economic community, but it expanded to take in Spain and Portugal when objectively their economies or political systems . . . were not ready.

“Similarly it expanded and took in Greece before its polity was up to European standards. It was done in order to democratise Europe after [dictatorships in those countries]. People took risks to do that and people were generous to do that in the core of Europe. They transferred resources through cohesion policies. That spirit was lacking in the past five years and it has had an impact on European politics.”

He said that mood had help sow the seeds of ultra right advances and a return to nationalism. “It’s seeing everything through the righteousness of your own country and the awfulness of the foreigner. It’s a simple message to peddle and an awful dangerous one that Europe will have to guard against.”