Labour document claims Renua is ‘to the right of Trump’ 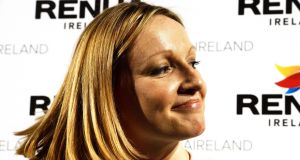 Labour’s guide for canvassers outlines “five reasons to fear Sinn Féin in government” and claims Lucinda Creighton’s Renua party is “to the right of Donald Trump”.

The document, which aims to help party members make their case on the doorsteps during the election campaign, says that Sinn Féin has performed “more u-turns than a dodgy plumber” on issues such as the bank guarantee, taxes and spending cuts.

“Sinn Féin tell us they have nothing to do with the IRA. But events tell a different story.

“Whether on cases of child abuse, ongoing crime, paramilitary activity [both] North and South and corruption, the IRA most definitely haven’t gone away,” the document states.

“Sinn Féin’s past and its links to the IRA should make people very afraid of them serving in government.”

The document accuses Sinn Féin of hypocrisy on the issue of water charges, while “installing water meters in Northern Ireland”.

It accuses the republican party of being unable to provide stable government in Northern Ireland and says its “fairytale economics” would crash the economic recovery.

The document says that Sinn Féin opposes austerity in opposition but embraces it in government.

The document also states that Renua’s flat tax proposals are “too right-wing for Donald Trump” and that the party is “anti-public sector workers”.

It says Renua wants to “punish” the unemployed.

The document says: “Right-wing republican candidates in the US are fans of flat taxes as they benefit the ‘fat cats’ at the top, but even Donald Trump thinks this radical form of tax policy is too unfair.

“If Renua’s tax policy is too right-wing for Trump they’re in trouble.”

Turning to the Independent Alliance, the document describes it as a “motley crew”, ranging from the extreme left to the extreme right, and says leading member Shane Ross has “flip-flopped from being a cheerleader of the bankers to an ally of the far-left”.

The document says an “alphabet soup” of Independents would pose a danger to economic recovery.

Referring to the Anti-Austerity Alliance-People Before Profit grouping, the document says: “Magic beans only work in fairytales.”

The document says the Social Democrats “aren’t really social democrats at all”, while Fianna Fáil has “nothing to offer but the past”.