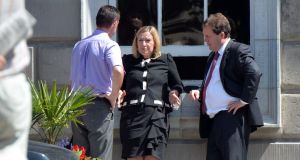 Lucinda Creighton with her husband Senator Paul Bradford (right) and Louth TD Peter Fitzpatrick (left) on the steps of the Dáil as as the debate continues over the abortion Bill. Photograph: Alan Betson/The Irish Times

In a crucial test of his leadership, Taoiseach Enda Kenny managed to contain the Fine Gael revolt against his Government’s abortion legislation to a handful of TDs.

After days of intensive meetings and consultations a number of Fine Gael TDs who had expressed concerns about the impact of the legislation were persuaded to back the measure. Some said they had been reassured by the discussions, although Mayo TD Michelle Mulherin made it clear she was only voting for the Protection of Life During Pregnancy Bill to avoid being expelled from Fine Gael.

The one TD who was not persuaded to support the Bill was Minister of State for European Affairs Lucinda Creighton who said she could not support the suicide clause in the legislation.

Ms Creighton was the only woman TD out 26 in the Dáil due to vote against the measure on anti-abortion grounds, while six left-wing TDs said they were voting against the bill on the basis that it was not liberal enough.

It was a day of noisy emotion at the gates of Leinster House as the marathon debate began with anti-abortion groups making their feelings known with placards and chants throughout the day. Some also knelt to pray that Mr Kenny and Tánaiste Eamon Gilmore would drop the legislation. A demonstration by a group campaigning for a more liberal abortion regime developed in the evening with the opposing side chanting slogans at each other.

National debate
Both inside and outside the chamber it marked the end of a long national debate which was profoundly influenced at the outset by the death of Savita Halappanavar. While it was always clear that the Bill would receive the overwhelming support of the Dáil, with a huge majority that included TDs from all of the political parties and a number of Independents, the focus was on the number of Fine Gael TDs who would vote against.

While there had been speculation that the number could be as high as 10 it became clear as the debate on the report stage amendments to the Bill wore on that support for the legislation was hardening.

The first doubtful TD to declare his position was Mayo TD John O’Mahony who has had a series of meetings over the past week with the Taoiseach, the Minister for Health and the Attorney General.

He announced that after “careful and detailed consideration” over recent months he had decided to vote for the legislation. “I am satisfied that this Bill will create a rigorous and restrictive regulation of existing legal rights and that that the safeguards therein are adequate to prevent abuse of its provision,” he said in a statement

His constituency colleague Ms Mulherin also announced her decision to support the Bill but she made it clear to the Dáil that she was doing so with huge reluctance.

She said she was very disappointed that Minister for Health James Reilly had made “very little accommodation” to her concerns in the Government amendments to the Bill.

Ms Mulherin revealed that she had met Dr Reilly for an hour on Monday evening and the Taoiseach for an hour and a half. “I have the choice of voting for the legislation or being booted out of my party. I am not going to allow myself to be booted out so I am supporting this legislation,” she said.

Suicide clause
Ms Creighton made it clear in a speech on amendments she had put down on the suicide clause in the Bill that she was not prepared to vote for it.

She appealed to Dr Reilly to “please listen to the evidence which has been put forward by medical experts . . . please let’s not enshrine flawed legislation on our statute books”.

Discussion on the amendments continued late into the night, with a vote at 10 pm to extend the debate until 5 am.