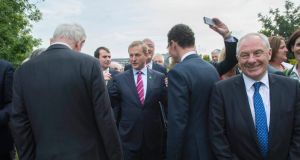 Taoiseach Enda Kenny has said the “timescale” to make progress in Northern Ireland is now very limited, but asked political leaders to take their responsibilities seriously.

Speaking at the Fine Gael think-in in Adare, Co Limerick, Mr Kenny said: “The opportunity and the timescale in which to make progress here is very limited now and I would hope that the elected representatives of the people of Northern Ireland in their respective parties would take their responsibility that was given to them by the people to make sure the institutions of Northern Ireland continue to work and be functional in the interests of the people of the North.

“The people of this country, north and south, voted overwhelmingly in favour of the Good Friday Agreement, the devolution of authority, the acceptance of responsibility of elected representatives of numerous parties in Northern Ireland with the support and encouragement and willingness of both the Irish Government and the British governments.

“This is a very serious situation which faces Northern Ireland at the moment and I do hope that all of those parties will reflect on the short time that is available to them before the situation, in so far as the preservation of the institutions is concerned, will fall flat.

“The Government are willing and available to support and work in any way with the parties in Northern Ireland day and night in the interests of getting the assembly and the executive back on track and focussing on the needs, the demands and the challenges that face the people of Northern Ireland.

“I do hope the leadership in the parties will reflect on the responsibilities given to them by people and they will take that responsibility on board.”