Kenny says report on paramilitaries is of serious concern 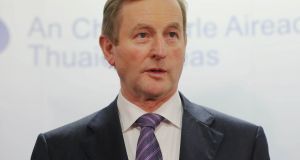 Northern Secretary Theresa Villiers had commissioned a three-member panel to review PSNI chief constable George Hamilton’s assessment that the IRA still exists and that some of its members were implicated in the murder of Kevin McGuigan, who was shot dead in east Belfast in August.

The report by members of that panel, British Liberal Democrat peer Lord Carlile, former senior Northern Ireland civil servant Rosalie Flanagan and lawyer Stephen Shaw, found that the IRA “remains in existence in a much reduced form” and that an IRA army council is still operating.

Mr Kenny told the Dáil on Tuesday that the report raised questions on the existence of illegal organisations and command structures, their access to illegal weapons and widespread criminality.

“They never did, and the future of the peace process depends on them being removed from the life of this island once and for all.’’

He said the Irish and British governments would examine the assessment very closely.

The Taoiseach was replying in the Dáil on Tuesday to Fianna Fáil leader Micheál Martin, who said a well-resourced joint British-Irish agency should be set up to focus on organised crime by members of paramilitary groups.

Some 27 animals seized after garda led operation into farm 14:26
Residents in centre for autism had to stay in bedrooms ‘for own safety’ 13:59
CervicalCheck tribunal starts work and is accepting claims from women 13:23
Traffic ‘significantly busier’ as State exits second lockdown 13:14
Taoiseach does not expect new restrictions before Christmas if Covid-19 cases rise 13:12