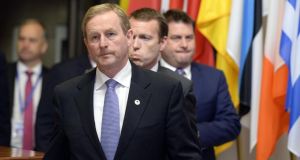 Taoiseach Enda Kenny has described negotiations leading to the Greek government’s deal with its creditors as “bruising” but he welcomed the breakthrough that laid the basis for an agreement.

Mr Kenny said the text now had to go to various national parliaments, including the Greek parliament.

“This has been a pretty bruising experience over the last period, but what it has allowed for is the basis for a third agreement for Greece which will allow for the Greek economy to thrive and prosper and continue to remain a member of the euro zone.”

Mr Kenny said Greece was in “a very challenging position”, but Greek prime minister Alexis Tsipras said he was “up for” the challenge. “It is hoped that this now can go through the Greek parliament with assistance from all sides,” he said.

‘Side of the strong’

Sinn Féin leader Gerry Adams accused the Government of taking the “side of the strong” against Greece in negotiations. Speaking after news of a deal at European level broke, Mr Adams said: “The conduct of a number of EU governments over the past number of weeks has been alarming.

Tánaiste and Labour leader Joan Burton expressed relief that euro zone leaders had managed to strike a deal, and she attacked Sinn Féin’s stance on the crisis. She said Ireland and the “European social democratic movement” had been extremely supportive of Greece.