Taoiseach claims main factor is whether Government has completed its objectives 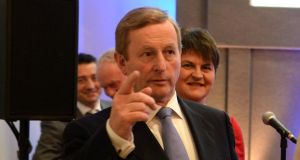 Taoiseach Enda Kenny. Mr Kenny has said that his focus when calling a general election will be on whether the Coalition has completed their programme for government. File photograph: Cyril Byrne/The Irish Times

Taoiseach Enda Kenny has said his focus when calling a general election will be on whether Fine Gael and Labour have completed their programme for government.

Mr Kenny has consistently said the Coalition will see out its full term until spring 2016, but speculation has increased recently about the possibility of an earlier election around autumn 2015.

The Taoiseach was asked about the timing of the election by RTÉ News in Castlebar, Co Mayo, yesterday. Mr Kenny was in his home town to attend a number of events including the opening of a bottle bank.

While Mr Kenny said he saw no reason to change his view on a spring 2016 election, he said his main focus had been on completing the agreed programme set out by Fine Gael and Labour.

A number of Fine Gael TDs privately say an autumn election is preferable, but other sources within the senior Coalition partner believe it makes sense to hold on as long as possible to allow for the benefits of economic recovery.

Labour, while in favour of a spring 2016 poll, acknowledges the calling of an election is the Taoiseach’s prerogative.

“My focus has always been to complete our programme for government,” the Taoiseach said. “We renewed that last year with the Labour Party and that’s where my focus is.

“This is a requirement in the Constitution which is very clear that the Taoiseach of the day has the ultimate responsibility to call an election, that is, short of a Government being beaten on a financial motion in a budget or running out to the end of its actual term.