Kenny says Border poll should be considered in Brexit talks

‘Who knows what may happen in the time ahead?’ Taoiseach tells reporters at MacGill 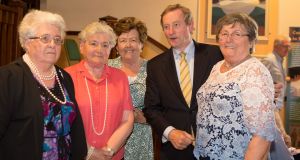 Taoiseach Enda Kenny has said that the prospect of a future border poll on the re-unification of Ireland should be included as part of the negotiations between the EU and the United Kingdom on the Britain’s departure from the bloc.

Speaking at the MacGill summer school in Glenties Co Donegal last night, Mr Kenny departed from his prepared script to raise the prospect of a border poll at some point in the future. However he stressed that the conditions for such a vote did not exist at present, and he did not favour a vote at present

He compared the possibility of the North joining the Republic and immediately becoming part of the EU to the reunification of Germany in 1990. Mr Kenny said that the EU-UK negotiations should take account of the possibility.

On Sunday night at MacGill, Fianna Fáil leader Micheál Martin also raised the prospect of a future border poll, though he also stressed that there was little prospect for a vote in the near future.

Sinn Féin has upped its campaigning for a border poll in the wake of the British referendum, in which the North voted to remain in the EU.

Later, the Taoiseach told reporters that the coming negotiations should examine the possibility.

“The discussions and the negotiations that take place over the next period should take into account the possibility, however far out it may be, that the clause in the Good Friday Agreement may be triggered, in that, if there is clear evidence of a majority of people wishing to leave the United Kingdom and join the Republic, that that should be catered for in the discussions that take place,” Mr Kenny said.

“In the same way as East Germany was dealt with when the wall came down, was able to be absorbed into West Germany and not to have a tortuous and long process applying for membership of the European Union.

“Who knows what may happen in the time ahead? I’m just making the point that these are the kind of things that should be looked at in the broadest of ways.”

Asked if such an eventuality could actually happen, the Taoiseach implied it was possible. “Well, people said it would be impossible that Britain would leave the European Union,” he said.