Kenny’s department to prepare for possible UK exit from EU 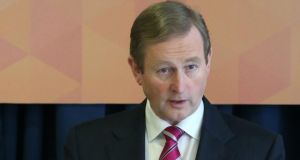 Enda Kenny: a new unit is to be established within the Department of the Taoiseach to prepare for the possible exit of Britain from the European Union as well as dealing with other aspects of Irish-UK relations. Photograph: Colin Keegan

A new unit is to be established within the Department of the Taoiseach to prepare for the possible exit of Britain from the European Union as well as dealing with other aspects of Irish-UK relations.

Martin Fraser, the secretary general of the Department of the Taoiseach, has sent an email to staff outlining why the “small, new” unit is being established.

British prime minister David Cameron, who favours the UK remaining in the EU if concessions are granted from Brussels, has promised an “in-out” referendum if the Conservatives are returned to power following the British general election in May.

Mr Cameron’s promise to hold a referendum only applies if the Tories win an outright majority at Westminster, which looks unlikely on current poll figures. He has also said Britain will attempt to renegotiate aspects of its EU membership before any referendum.

He said the possible recalibration of British-Irish relations was “one of the major strategic challenges we will face as a country” over the period of a new strategy statement for the department from 2015 to 2017.

Mr Fraser said there were a range of potential important developments which could impact on Northern Ireland, North-South relations and relations with Britain over the next three years and “greater focus and resources” needed to be allocated within the department.

As well as Northern Ireland and North-South relations, he cited “the crucial question of potential changes in Britain’s relationship with the EU”.

He invited applications for the new post of assistant secretary to head up the unit which will comprise only a few people, it is understood.

The move is in contrast to the relatively low-key approach the Government took towards preparations for the potential break-up of the United Kingdom last year if the Scottish independence referendum had passed.

Various Coalition Ministers declined to express a view on the Scottish vote, and details of any potential preparations by officials were not disclosed.

Taoiseach Enda Kenny and other members of his Government have already said they believe Britain should remain in the EU. Speaking earlier this year, Mr Kenny said it would be “impossible” to remain silent in the British debate, adding Ireland would be “candid if we are presented with [renegotiated] proposals that we do not see as achievable or desirable”.

“While we are respectful of the democratic debate which is ongoing in the UK, it is impossible to remain silent on an issue which impinges so directly on Ireland’s national interests,” the Taoiseach said.