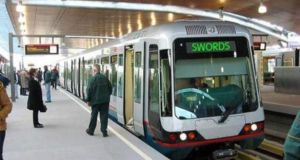 A revised proposal for a metro linking Dublin city centre to Dublin airport is among the key elements of the captial spending plan to be published on Tuesday.

Taoiseach Enda Kenny has defended the announcement of the Government’s six-year capital spending plan at almost the end of his Coalition’s term and with a general election due within months.

Speaking on his way into Tuesday’s Cabinet meeting, Mr Kenny said details of the €27 billion plan would be announced by Minister for Public Expenditure Brendan Howlin and Minister for Transport Paschal Donohoe later.

“The next government will introduce budgets right out to 2020 for 2021. So there’s no need to be getting excited about an election,” Mr Kenny said.

Mr Kenny said an important element of the plan would be a mid-term review. It would look at whether some of the projects involved would be able to get through all the planning processes and possible court objections.

“It’s an attempt really to address priorities in a whole range of sectors,” Mr Kenny said.

Mr Howlin, also speaking ahead of Cabinet, said the five-year capital plan published in 2011 would run out this year so a new plan was due.

He said he had been in direct contact with every line Minister to see where the “bottlenecks” to recovery were in the economy.

Mr Howlin said the plan would ensure regional balance in the economy and ease demographic pressure in the education sector.

“Of course the €27 billion isn’t an end in itself. There are other resources available to the State, through Nama, through public private partnerships, through the investment of the State companies, including Irish Water, which will significantly supplement that €27 billion.”

The capital programme, with a higher than anticipated budget, will provide for major infrastructure projects, primarily a new rapid transit system from Dublin city centre to Dublin Airport and Swords.

It will also include funds to allow the quick completion of the National Children’s Hospital and a substantial increase in expenditure for school buildings. The Government has estimated 45,000 jobs will be directly created during the construction phase.

The six-year project will be announced by Mr Howlin, along with Mr Kenny and Tánaiste Joan Burton. Such plans are normally five years in duration but the addition of a sixth year allows a substantially increased allocation.

A further announcement will be made by Mr Donohoe, who will unveil details of his multibillion spending envelope, including the preferred rapid transport project.

One of the six options being examined was a revised metro system costing over €1.5 billion, which seems the likely choice.

The next single largest project in the plan is the children’s hospital. It will be allocated €650 million, of which €200 million will come from the lottery licence.

The Department of Health will be given €450 million to fund the repairs of nursing homes. Exchequer funding will provide €300 million, with the remaining €150 million being raised through public-private partnership schemes.

The Department of Education will see its capital envelope significantly increase from slightly more than €2 billion in the last plan to more than €3 billion. This is to accommodate an expansive school building programme to cater for the large increase in children expected to enrol in schools.

Most of the capital spending for housing was announced last year in a €4 billion package. In the new programme, the Department of the Environment has secured an additional €500 million for social housing. The Government will also allocate €1 billion for flood relief schemes.