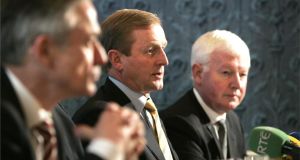 Much has been made over the past fortnight of the absence of Phil Hogan and Frank Flannery (right) from the side of the Taoiseach as Fine Gael blundered its way into the biggest crisis of Enda Kenny’s leadership. File photograph: Dara Mac Dónaill/The Irish Times

Much has been made over the past fortnight of the absence of Phil Hogan and Frank Flannery from the side of the Taoiseach as Fine Gael blundered its way into the biggest crisis of Enda Kenny’s leadership over the smallest of issues.

Hogan’s political cunning and nous was on full display yesterday as he swatted away opposition from Irish MEPs to his nomination as agriculture commissioner but has been absent from the inner circles of Fine Gael since Kenny put his name forward in July.

Flannery, who resigned from Fine Gael earlier this year following the emergence of details about his lobbying for Rehab, is well away from the political game and feels sore about his treatment.

While it may be possible to overstate their importance to Kenny – it has been suggested neither was as close to the Taoiseach in their last few months as they had been – Fine Gael has been left in a position this week where an unnamed official is being touted as a key figure in the for McNulty controversy.

Minister for Arts Heather Humphreys yesterday said she is “not at liberty to say” who approached her about putting McNulty on the board of the Irish Museum of Modern Art.

While it is unclear if the person Kenny and Humphreys are referring to are one and the same, both have been asked to reveal the identities of the officials who are carrying the can.

We are unlikely to ever find out who he, she or they are but, this being politics, it hasn’t stopped people wondering.

Many Fine Gael sources believe there are two, maybe three, people at a senior enough level to be making such calls about candidates and strategy.

“This stuff is only ever handled by a small group of people,” one well-placed figure said.

Of those three, the first two are seen as the more likely, even though Murphy also operates on a senior level within the party.

Some lean more towards Fine Gael headquarters on Mount Street.

Does it really matter, however?

In the wider context, no, because the general public cares a great deal less about the inside baseball of Fine Gael apparatchiks than it does about a controversy over a Seanad seat.

But those around the party will be watching to see if a career casualty arises from this affair, and whether somebody moves on to “find new challenges” in the coming months.

“All staff in Fine Gael should be firmly instructed to steer clear of buses,” said one party source. “It’s high-risk territory at the moment.”