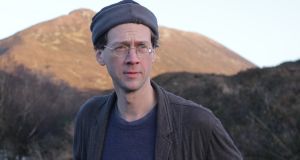 Television presenter and travel journalist Manchán Magan who will contest the general election for the Green Party.

The television presenter and travel journalist Manchán Magan will contest the general election for the Green Party in the Longford-Westmeath constituency.

Mr Magan is an Irish-speaking writer and documentary-maker whose reports have been published in The Irish Times.

“I am running for the Green Party in Longford-Westmeath as a way of offering fresh perspectives on the potential of this region. There is a desire for living creative, fulfilling and sustainable lives in this area, and yet rarely are alternative positive proposals brought forth,” he said.

“By uniting as a community we can become a vibrant and prosperous Eden… a return to our former role where the Midlands were considered the core of Ireland: Mide, the place from where all life and energy radiated.”

Mr Magan said he would be “highlighting the positive” and “suggesting enlightened initiatives” in his campaign. He said the Longford-Westmeath region was rich in resources and ripe for small-scale, sustainable development.

“All we lack is the impetus to reshape our lives – to choose and implement innovative local solutions.

“My goal is to provide a platform whereby communities can explore novel solutions to our current challenges.”

It will remain a four-seat constituency at the upcoming election.

In a statement, the Green Party said it was “delighted” to announce Mr Magan’s candidacy.

He says there should be intensive, home-retrofitting schemes, with grants that cover at least 75 per cent of insulation, damp-proofing and double-glazing costs.

Pre-school and primary education should be “enlightened, outdoor-focused”, he said.

He is also calling for a focus on sustainable farming and community-owned renewable power generation, including wind turbines and biogas plants.

He says the tourism potential of lakes, rivers and peatland wildernesses should be developed.

Mr Magan has written books on his travels in Africa, India and South America and two novels.

According to information on the new candidate distributed by the Green Party, he has been a medical supervisor to an Indian leper colony and managed an Ecuadorian organic fruit farm and guesthouse.

In 1997 he built the first straw bale house in Ireland, near Collinstown, Co Westmeath and planted a six-acre oak and larch forest which he said now supplies his home-heating needs.

“Seeing the transformation of my under-grazed field into a fertile woodland that now supports five free-range pigs and shelters a 40 fruit tree orchard and a colony of honey bees has shown me the potential of our temperate, midland landscape to offer a rich and sustainable quality of life at little cost,” he said.

Mr Magan reports weekly on travel for Newstalk’s The Right Hook programme and has presented dozens of documentaries on history and world culture for TG4, RTÉ and the Travel Channel.