John O’Donoghue not to stand in next general election 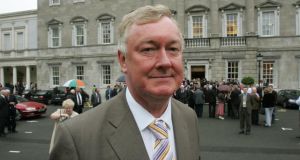 Former ceann comhairle and TD for Kerry South John O’Donoghue will not seek nomination to run for Fianna Fáil in the next election. Photograph: Frank Miller/The Irish Times/File photo

The former ceann comhairle and TD for Kerry South, John O’Donoghue, will not be seeking the nomination to run for Fianna Fáil in the next general election.

The news broke via his cousin Michael O’Shea, a county councillor representing South and West Kerry who has thrown his hat into the ring.

Mr O’Donoghue, who now practises as a barrister, lost his seat at the last general election. However he said he would be seeking to regain his seat. In the meantime the former solicitor sat his bar exams and is now a qualified barrister.

“It was a shock to all of us to hear he wasn’t standing,” Councillor O’Shea said.

Mr O’Donoghue had “a brief discussion” with him in the past 48 hours to say he was not standing “at this time”.

“He’s a very clever man, he keeps his cards close to his chest,” Mr O’Shea said. “Maybe he sees something further down the road in politics.”

The Fianna Fáil convention will take place on March 29th and a single candidate is to be selected, with a second candidate from the former Kerry South constituency to be added.

Kerry is a single constituency with five seats at the next general election.