John McGuinness says he will vote No in marriage referendum 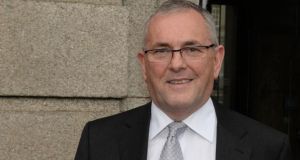 John McGuinness TD: intends to vote No in both referendums. Photograph: David Sleator.

Fianna Fáil TD John McGuinness has confirmed he is voting No in the same-sex marriage referendum.

Mr McGuinness will not back the official party position on the lowering of the eligibility age of presidential candidates or on the marriage referendum.

The Carlow-Kilkenny TD was responding to a poll of all TDs and Senators by the Irish Times on their voting intentions. When contacted, the Public Accounts Committee chairman declined to elaborate further on his decision but confirmed he is voting No.

Fianna Fáil is endorsing a Yes vote in both referendums taking place this Friday. The party is not allowing a vote of conscience, which it did for the Protection of Life During Pregnancy Bill.

Mr McGuinness is believed to have told his colleagues about his decision at a parliamentary party meeting in Co Kilkenny last week.

Senator Averil Power had raised the refusal of some party members to actively canvass in the same-sex marriage referendum.

There was said to be no support at the meeting for her position and she was shouted down by some members.

It is understood Mr McGuinness told his parliamentary party he would not seek a Yes vote in his constituency.

A number of other members are said to have supported the Carlow-Kilkenny TD.

A spokesman for Fianna Fail said: “Fianna Fáil policy on the Marriage Equality Referendum is clear – we are advocating and campaigning for a strong YES vote.

“The party also supported the enabling legislation in Dáil and Seanad Éireann. Ultimately, each individual in the party will vote in private and make that decision themselves, but the party’s policy, decided at Ard Fheis and confirmed by the Party’s Front Bench is very clear.”

Éamon Ó Cuív yesterday refused to be drawn on how he would vote because it was a secret ballot.

The parliamentary party met in Co Carlow last night for its weekly meeting where the referendum was due to be discussed.

Mr McGuinness is one of three TDs who have confirmed they are voting No in the same-sex marriage referendum.