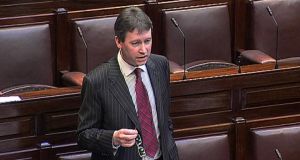 Former Government chief whip John Curran has been selected as the Fianna Fáil candidate for Dublin Mid-West in the next general election.

There has been no Fianna Fáil TD in Dublin since the death of Brian Lenihan in 2011.

Mr Curran served two terms as a TD between 2002 and 2011 before being appointed as a Minister of State with responsibility for the national drugs strategy in 2008. He was promoted to Government chief whip in the final year of the Fianna Fail-Green Party coalition.

He lost his seat in the 2011 election having topped the poll in Dublin Mid-West in the previous general election of 2007.

Mr Curran, who will be 55 next month, lives in Clondalkin and was actively involved in a number of community organisations including the GAA before he became involved in politics.

He was elected to South Dublin County Council in 1999 for the Clondalkin/Newcastle electoral area before getting elected to the Dail on his first attempt in 2002.

After he lost his seat in 2011 he worked with became a Dublin organiser with Fianna Fail.

He pointed out recently that he had been a minister of state with responsibility for the national drugs strategy and had continued to stay in contact with groups in that area.

“It’s a question of pursuing those issues. How I can pursue them effectively?” he responded when asked why he was considering standing for election again.

Mr Curran attended Moyle Park College in Clondalkin before going to UCD where he graduated with a Bcomm.

He was a company director before becoming a full-time public representative.