Opinion: His government ran a prudent economic policy that provided the basis for sustainable prosperity 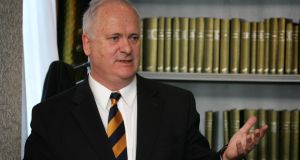 ‘John Bruton’s core point is that if commemorations are about drawing relevant lessons for today’s generation from the work of past generations then the remarkable exercise of parliamentary leverage that achieved Home Rule may have greater relevance to today’s generation of democrats than does the blood sacrifice of Pearse and Connolly.’ Photograph: David Sleator/The Irish Times

Irish politicians are routinely criticised for focusing on parish pump issues and ignoring the big national and international questions of the day, but the treatment meted out those who challenge conventional wisdom hardly encourages serious debate.

The latest example is the flood of criticism, some of it downright nasty, directed at former taoiseach John Bruton for daring publicly to question how the violent legacy of 1916 is remembered and for raising doubts about the long-term sustainability of welfare systems that are taken for granted in the developed world.

Bruton has never made any secret of his admiration for the Irish Parliamentary Party leader John Redmond, who managed through unremitting political activity and shrewd parliamentary tactics to get the Home Rule Bill on to the statute book 100 years ago. Redmond’s achievement paved the way for Irish independence, even if that came about in a different way than he envisaged, when the first World War and then the 1916 Rising changed the context utterly.

Bruton’s thesis is that full independence could have been achieved without the resort to violence and all the death and destruction that followed from the Rising right down to the present day. It is an arguable point. We will never know.

However, Bruton has raised a point worth serious consideration. That is whether the use of violence actually helped to resolve the problems of a divided society or made them worse.

In the event, the resort to violence did not get either side what it wanted and Ireland was partitioned amid bitterness and recrimination that have poisoned the island’s politics down to the present day.

Bruton’s core point is that if commemorations are about drawing relevant lessons from the work of past generations, then the remarkable exercise of parliamentary leverage that achieved home rule may have greater relevance to today’s generation of democrats than does the blood sacrifice of Pearse and Connolly.

That is certainly a point worth considering, particularly as dissident republicans plot violence and mayhem in the name of the 32-county republic envisaged by the 1916 leaders, despite the overwhelming endorsement of the Belfast Agreement and its core principle of consent by the majority of people on this island. The rest of Europe learned a much harsher lesson on the futility of violence through two world wars. The EU emerged as a result of the widespread desire to ensure leaders of the great powers would never again plunge their countries into total war.

His critics got more ammunition to attack the former taoiseach with the release of a tape recording contain comments he made at a social function in New York last year. In the course of a discussion he raised the issue of how the European social model, its welfare entitlements and pensions were going to be funded into the future as the continent tried to compete with the rising power of China and other developing countries.

There was certainly something off-putting about a group of very wealthy business people being told the governments of the developed world would ultimately have to default on their commitments to their citizens. That, however, does not invalidate the nub of the argument.

Bruton’s critics have not come up with a coherent response to his basic question and instead highlighted that he is currently very well paid as chairman of the International Financial Services Centre in Dublin and draws a handsome pension as a former taoiseach. That is all true, but has nothing to do with the case he is making.

When he was in the taoiseach’s office Bruton performed very well. His government ran a prudent economic policy that provided the basis for sustainable prosperity. To its great credit the Rainbow coalition didn’t engage in vote-buying in the run-up to the 1997 general election and as a result narrowly lost power.

Both in office and out of it, Bruton has made a habit of speaking his mind. The latest bout of venom directed at him shows why so many Irish politicians often keep their true opinions to themselves. Playing the “cute hoor” is still the safest option in Irish public life.