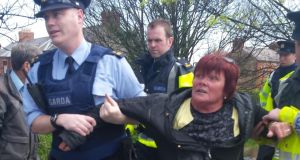 TD Joan Collins is understood to be one of 15 people arrested during the protest on Parnell Road in Crumlin, Co Dublin on Monday. Photograph: Delboypix/Clondalkin Meter Watch group 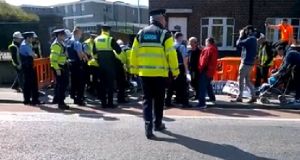 A screengrabbed image of the water protest taken from a video posted on Facebook.

United Left Alliance TD Joan Collins was arrested at a protest against the installation of water meters in south Dublin on Monday.

Ms Collins is understood to be one of 15 people arrested during the protest on Parnell Road in Crumlin, Co Dublin.

The demonstrators were protesting against the installation of meters.

Ms Collins was taken to Terenure Garda station for questioning and has since been released. A file is due to be sent to the Director of Public Prosecutions.

Ms Collins said she resisted in a peaceful way. She said: “I was supporting the constituents in my community.

“I believe I behaved the way I should have.” The United Left TD told Newstalk 18 gardai arrived at the scene.

She said she had been elected to oppose such measures including the bin tax.

Councillor for Left Alliance Pat Dunne was also arrested and said this signalled a “change in Garda tactics”.

Mr Dunne said: “There was no meters being installed. We were awaiting a meter to be installed.

He said gardai user the Public Order Act and said it signals a change in Garda tactics.

“It was bizarre. It was a peaceful protest. There was no pushing or shoving.”

Minister for Transport Paschal Donohoe said TDs who make the law have a duty to uphold it.

He said: “Those few people who have the opportunity to change the law and who have the privilege to do it and to pass new laws have a particular responsibility to obey that law once it is passed.”