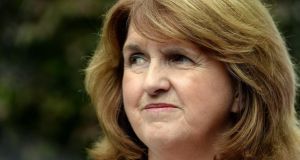 Minister for Social Protection Joan Burton: not yet clear if she will be opposed in Labour leadership race. Photograph: Cyril Byrne

Minister for Social Protection Joan Burton is expected to announce her bid for the leadership of the Labour Party today, but it is not clear if she will be opposed, or by whom.

Minister for Public Expenditure and Reform Brendan Howlin has not yet made a decision on whether to run. He contested the leadership on two previous occasions.

Minister of State Alan Kelly said yesterday he would contest either the leadership or the deputy leadership, but had yet to make up his mind which position to go for. He said “a generational change” was needed at leadership level and claimed that he had received a lot of support in recent weeks from TDs, Senators and councillors.

His junior ministerial colleague Alex White is considering whether or not to put his name forward for one of the positions, but another junior minister, Seán Sherlock, has ruled himself out of the contest.

Nominations for the position are now open, following a meeting of the party executive board last night that agreed the arrangements for the election of a new party leader and deputy leader.

Nominations will close at noon on Tuesday and ballot papers will be issued on June 9th if there is a contest for either position. The ballots have to be returned by noon on Friday, July 4th, and the count will take place immediately.

The party legal adviser, Richard Humphreys, will be the returning officer and the party auditors will be independent observers.

All 5,000 or so paid-up members of the party will be entitled to vote. Members are entitled to pay arrears going back two years to get on the register.

Labour sources said last night that members in arrears had already started to come forward with their €15 annual subscription fees to ensure their eligibility to vote.

It is expected that a number of hustings will be held around the country at which party members will be addressed by the candidates for both positions.

A number of TDs emphasised yesterday they wanted to see a contest for the leadership.

Mr Howlin said the party needed to respond very strongly to the message from the ballot boxes.