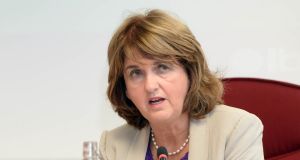 Tánaiste Joan Burton has said the idea of a European debt conference, to look at reducing our debt burden, following the Greek general election “has merit”.

Speaking after the Cabinet meeting on Wednesday, Ms Burton said: “In relation to the idea of a debt conference...I think the proposal has merit, as Minister [for Finance Michael] Noonan indicated yesterday,” she said.

Government sources have suggested a European debt conference could consider not only Greek debt but Irish, Spanish and Portuguese debt as part of a new approach to remaining problems facing the European Union bailout states.

“If there are proposals in a wider context in the European Union to look again at the issues which face countries on the periphery, well then of course Ireland will look for any further relief that may be obtainable in that context,” Ms Burton said.

“We will look to maximise our benefit from any initiatives that are undertaken in the wider European Union.”

Ms Burton stressed Ireland was “in a very difference place” to Greece.

She suggested Ireland may have inspired attempts to renegotiate debt in other countries.

Taoiseach Enda Kenny said the question of a debt conference had arisen in the context of the upcoming Greek elections, which was a matter for the Greek people.

“We are in a very different space here,” he added.

“A debt conference in that context is very different for Greece and that’s a matter for them and their authorities to negotiate.”

Mr Doherty said Ireland had a “huge” debt problem which the Government had “tinkered with but not tackled”.

He said the prospect of the Syriza movement in Greece appeared to have put the item on Mr Noonan’s agenda.

“Regardless of which government the Greek people elected, Minister Noonan needs to put a debt conference on the agenda of the EU Finance Minister meeting with or without Greek support,” he said.

Finland’s prime minister has warned that the Nordic country would give a “resounding no” to any move to forgive Greece’s debts.

The warning from Alex Stubb in an interview with the Financial Times puts Finland on a collision course with Syriza, the radical left party that is currently leading the polls in Greece and has put debt relief at the core of its election proposals.