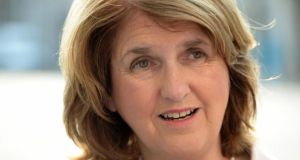 Tánaiste Joan Burton has rejected the idea of a five-year tax reform plan being included in the Government’s spring economic statement, while a Fine Gael MEP says he supports such a move. Ms Burton told RTÉ Radio’s Today with Seán O’Rourke that she was conscious of over-promising to the electorate and she wanted to take economic measures “one year at a time”.

“It won’t be in the spring statement,” Ms Burton said of a tax reform plan. “That is not what the agreement between myself and the Taoiseach, or between the two finance Ministers, is about. We want to build the budget for growth and recovery.” However, Fine Gael’s Dublin MEP Brian Hayes indicated he favoured a tax reform plan and said it was important people were provided certainty.

Ms Burton said she wanted to “take this one year at a time . . . I want any plans that the Government makes to be actually realisable plans that we intend to implement”. She drew on Labour’s experiences before the last general election, and said that the party was “rightly criticised . . . for making promises which we thought, were we in government, in a majority, we could do.

“We weren’t able to do them and people said: ‘Well, you over-promised’. I am very anxious the Government now, as recovery picks up and people begin to see it, that we are very clear about what we do to build it and to sustain it and to protect the country from future economic shocks.”

However, Mr Hayes, a former junior minister in the Department of Finance, said it was “important for taxpayers that they know what the Government wants to do and there’s certainty on that. Whether it’s a five-year or a two-year plan is less important. People need to know in their own lives where things are going.”

He said 1.9 million people were “keeping this country afloat” by paying taxes. “The more certainty in a road map the better.”