Is Labour playing safe in the generation game? 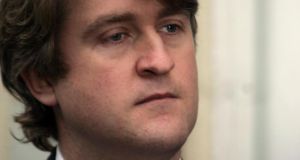 Clare Labour TD Michael McNamara (40) has demanded an immediate alteration of the party frontbench age profile. “There has to be a change - not just rearranging the deck chairs - a fundamental change in generation of the leadership of the Labour Party and also its focus and directio.” Photograph: Eric Luke/The Irish Times

The call for a “fundamental change in generation” of the Labour Party leadership has evaporated pretty quickly.

Last week, one of the “gang of eight” who signed the motion of no confidence in former leader Eamon Gilmore (59) said the party needed to move to put a younger person in the party’s most senior position.

Clare TD Michael McNamara (40) demanded an immediate alteration of the party frontbench age profile. “There has to be a change - not just rearranging the deck chairs - a fundamental change in generation of the leadership of the Labour Party and also its focus and direction,” he said.

Some of the “gang of eight” are publicly supporting Minister of State for Primary Care Alex White (55), while one of the signatories, Arthur Spring (37), has today backed Minister for Social Protection Joan Burton (65).

As expected, Spring ruled himself out of the race this morning just as the deadline for nominations was approaching.

Spring’s uncle Dick was just 33 when he assumed the mantle of party leader, but now no TD in their 30s or 40s is even taking a shot at the party’s top job.

A clutch of younger deputies are content to battle it out for the junior position.

The reality is that the ambitious TDs who put their signatures to the no confidence motion have subsequently been harshly criticised internally for their action and would be unlikely to receive much support.

Burton’s grassroots appeal is without doubt, and the sense is growing that her support in the parliamentary party is consolidating. The latest backbencher to offer support to Burton is Sean Kenny, who is in his very early 70s and insists “age doesn’t matter”.

There is widespread support for this view in the party. As Carlow-Kilkenny TD Ann Phelan (52), who proposed Burton, put it recently: “Being young is not a qualification... I’m a middle-aged woman. What’s wrong with that?”

The party may be keen not to follow the example of the British Labour Party and suffer from something similar to “the Miliband effect”, whereby an inexperienced young leader’s flaws are prominently on show at a vulnerable time for the organisation.

It is what the new leader does with his or her front bench selection that will be important.

Burton has already promised “change”, which may spell bad news for her current colleagues - with the exception of Minister for Public Expenditure and Reform Brendan Howlin.

White, speaking on Newstalk 106 this morning, said he was also in favour of “change”. He went on to say he would like to “maintain some experience and some continuity” with a “mix of the old and new”.