Is it time to revisit the idea of a federal Ireland?

Opinion: If the UK leaves the EU, the North’s status will change, perhaps disastrously 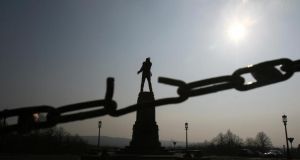 While the political parties at Stormont continue their shadow boxing and the world waits with bated breath for the insights of the US envoy to Northern Ireland, Gary Hart, into parades and flags, there seems little chance of what may be the biggest issue facing Northern Ireland even making it on to the agenda.

This is the accident that looks increasingly likely to happen: the UK’s exit from the European Union.

If it happens, the whole context in which the Belfast Agreement was framed, and in which the limited progress since then has been achieved, will be changed radically, and possibly disastrously.

The agreement makes only one mention of the EU (in the preamble, where EU membership is cited as one factor in the unique relationship between the UK and Ireland), but it is the framework of EU citizenship that validates its essential core: the idea that conflicting Irish and British identities can co-exist as equals within present-day Northern Ireland, pending some future resolution of the fundamental divide.

How would the promise in the agreement to “recognise the birthright of all the people of Northern Ireland to identify themselves and be accepted as Irish or British, or both, as they may so choose”, and accordingly to confirm their right to hold both British and Irish citizenship, be honoured if the UK, including Northern Ireland, was outside the EU, while the Republic was inside?

How would freedom of movement across the Border be guaranteed when one of the UK’s main motivations for leaving the EU would be to control migration? Would there be a return to a physical Border, with passport checks and queuing lorries? Would fresh restrictions on travel be placed on movement between the Republic and Britain, or even possibly between Northern Ireland and the rest of the UK? How would the nationalist community inside Northern Ireland respond to such a situation? Would those now seemingly comfortable enough within the UK remain so? How would the more nationalistic respond to the prospect of Irish unity becoming even more distant, and to the reimposition of a visible controlled Border between North and South? How would Northern Ireland fare within a UK outside the EU?

Scotland would almost certainly demand, and get, a referendum to make its own decision on EU membership, and would most probably opt to stay in the EU, not the UK. That would leave Northern Ireland painfully isolated within a UK that would be even more dominated by the 90 per cent of the population living in England, who are manifestly becoming increasingly nationalistically British or, in reality, English.

Northern Ireland is too small and too divided to permit the Scottish alternative of independence within the EU, so what options does it have, apart from voting No in any poll on leaving the EU and campaigning in Britain against exit on the grounds of the threat it would pose to a fragile peace?

The answer is very few, so is it time to revisit Conor Cruise O’Brien’s last and most controversial intervention in Northern affairs? In the late 1990s he suggested that the interests of the Protestant or unionist community in Northern Ireland were more threatened by the UK’s determination to do a deal with Sinn Féin/IRA than they would be by a negotiated deal with Dublin to unite Ireland under a federal-type arrangement that guaranteed all existing rights to all residents of the North. This community, he maintained, would be better able to defend its interests under such an agreement than it would as “despised hangers-on” and a tiny minority in the UK.

In a federal Ireland, unionists would be a formidable voting block in a system of government where coalitions are the rule rather than the exception. Conor Cruise O’Brien argued that London would be happy to be rid of Northern Ireland, and would facilitate such a move. Dublin might have more reservations but could hardly say no to the long-cherished goal of Irish unity. At that time, O’Brien also assumed that such a move would trump Sinn Féin, North and South. He did not foresee, it would seem, Sinn Féin’s continued electoral success in the North while playing a leading role in the administration of a devolved region of the UK. Nor, most likely, could he have predicted that party’s reinvention of itself in the Republic as the professed party of protest and social concern, and as the one party untainted by the tarnish that is staining politics generally (despite the much more sinister skeletons in its own cupboard).

Would any significant section of traditional unionism even look at a federal proposal? The once great obstacle of “Rome Rule” has almost vanished, but other roadblocks remain, and the answer is almost certainly no.

But might unionists consider it if life within a very much changed UK was less agreeable to them, and particularly if they felt they were being edged closer and closer to a united Ireland, either by pressure from London or by demographic change in Northern Ireland? This may be venturing into the land of fantasy, but then who foresaw the Chuckle Brothers, starring the immoderate moderator and the republican chief of staff, topping the bill at Stormont?

Everyone has his price, so what sort of price might unionism demand? Obviously a new constitution would be needed to accommodate the new Ireland, and some sort of devolved structure for what is now Northern Ireland.

Some things would have to go: the name of the state could no longer be Éire, nor could Irish be the “first national language”, nor the tricolour the national flag. (Though it’s not in the Constitution, a new national anthem would be needed, and we could throw in neutrality and the names of the railway stations as beyond their sell-by date.)

The constitution would have to reflect an ethos for the new entity to which all could subscribe. Writing more than 40 years ago, Michael Sweetman indicated what this might be: “We [in the Republic] have got to go back to 1912 and relinquish a great deal of what has happened since in order that both parts of the country can make a new start.” He deplored “consistent attempts to impose a narrow concept of Irishness, involving the primacy of Gaelic culture, the rejection of British strands in Irish traditions, and a particular view of history which made a virtue of fighting against Britain and a vice of defending British rule”.

That was written, by a then leading young Fine Gael thinker, before the Provisional IRA campaign had, over 30 years of pointless conflict, caused the loss of thousands of lives. What a tragedy that a Fine Gael Taoiseach could still say last month that he was always proud to be a 1916 man and that he saw the Rising as the central formative and defining act in the shaping of modern Ireland.

At this point we can probably stop fantasising. The Rising was the “formative and defining act” of a partitioned Ireland, in which one part was in many ways Rome-ruled, socially conservative (to put it mildly) and at times dangerously ambivalent towards armed republicanism. This held no attractions whatever for the “divided brethren” in the North. Much has changed in many ways, and in the minds of many of the people, but the State, and its political leaders, cling to their founding fictions.

Waking up at this point would save us from wrestling with the question of where the £9 billion London transfers each year into Northern Ireland would come from. In 1998, Conor Cruise O’Brien blithely assumed that London would be so happy to be shot of Northern Ireland, and Dublin so pleased to welcome it, and the international community so delighted for us all, that they would all stump up. Fat chance of that now. All of which leaves Northern Ireland, as ever, in the quare place.

Dennis Kennedy is a former deputy editor of The IrishTimes, and was European Commission representative in Northern Ireland from 1985 to 1991