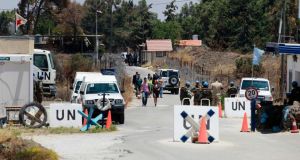 The Quneitra border crossing between Israel and Syria, as seen from the Israeli side of the Israeli-occupied Golan Heights last week. A Government spokesman said the Irish troops would be acting in an observer capacity in the area. Photograph: Baz Ratner/Reuters

More than 100 Irish troops are to be be sent to war-torn Syria as part of a United Nations observer force later this summer.

The Government yesterday approved the deployment of a 114-strong mechanised infantry unit to the Golan Heights at the request of the UN.

A Government spokesman said the Irish troops would not be acting as peacekeepers or peace enforcers but in an observer capacity.

“They will be in a position to respond quickly to situations as they develop,” he added. The addition of Irish troops will bring the UN force up to a strength of 1,250.

Last month, the Austrian government announced it was withdrawing its 380-strong force from the Golan Heights because the area had become too dangerous.

Deployment
Minister for Defence Alan Shatter announced he had secured the approval of the Cabinet for the deployment of the contingent for service with the UN Disengagement Observer Force in Syria which was originally established in 1974 following the war between Israel and Syria to monitor the situation at the Golan Heights.

Mr Shatter said he would proceed this week to seek the approval of Dáil Éireann for the mission.

The request for significant Irish involvement was made by the UN on July 1st when the Department of Defence was asked if it would consider contributing a mechanised infantry company for the tasks of a Force Mobile Reserve.

The Defence Forces have previous experience in a similar role in Liberia and Lebanon. Three Army personnel were deployed to the Golan Heights last month and a fourth will be sent shortly.The escalation of the civil war in Syria has affected the observer force’s area of operations significantly in recent months. Mr Shatter said if approved by the Dáil the role of the contingent would be to provide a mobile company at force headquarters to cater for reinforcement, escort and other operations.

He said the support of troop contributing countries such as Ireland to the observer force allowed the mission to continue implementing its mandate in a safe and secure manner.

Safeguard
Mr Shatter added that if the mission was approved by the Dáil this week it would complete the so-called triple lock safeguard procedure by which Ireland’s defence forces can only be deployed abroad with a combination of of UN, Government and Dáil approval.

The operation of the triple-lock system is one of the issues addressed in the Green Paper on Defence published by the Government yesterday.

It points to the central importance of the UN in granting legitimacy to peace support and crisis management missions.

“At the same time, it also constitutes a self-imposed, legal constraint on the State’s sovereignty in making decisions about the use of its armed forces. This could prevent the State from participating in a peace support operation,” adds the Green Paper.

Prevented
It points out that the triple lock prevented Ireland from participating in the EU-led mission to Macedonia in 2003.

The Green Paper acknowledges that there is substantial public support for the triple-lock mechanism.“On balance, the advantages of retaining the mechanism can be seen as outweighing the disadvantages,” says the document.

However, Fianna Fail accused the Government of endangering Irish neutrality by raising questions about the triple lock procedure in he Green Paper.