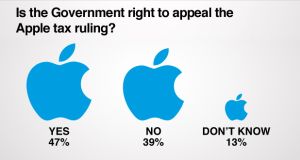 A majority of Irish voters believe the Government is right to appeal the European Commission ruling in the Apple case, according to the latest Irish Times/Ipsos MRBI poll.

When asked whether the Government was right to appeal the ruling that Apple should pay €13 billion in back tax, 47 per cent said yes, 39 per cent said no and 14 per cent had no opinion.

The decision to appeal the ruling caused a storm of controversy both at home and abroad, but the poll shows a majority of people back the Government’s stance.

In party terms the strongest support for the Government decision to appeal the ruling comes from Fine Gael supporters with 61 per cent of them in favour of bringing the matter to the European Court of Justice for determination.

Fianna Fáil voters are next in terms of support, followed by Labour supporters.

There is equally strong support for the Government decision among the best-off AB voters and the middle-class C1 voters while C2 voters are almost equally divided and the poorest DE voters are against the decision. Farmers, though, are in favour.

In regional terms the strongest support for the decision to appeal comes from Dublin followed by the rest of Leinster and then Munster with the strongest opposition in Connacht Ulster.