‘I have always been critical of Francis Bacon but I have decided to leave it till another day,’ President tells Royal Society 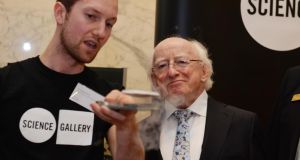 
President Higgins made no secret of the fact that he itched to set protocol aside on the second day of his state visit to the UK to take a swipe at the renowned Elizabethan politician and scientist Francis Bacon.

However, he managed to restrain himself on his visit yesterday to the Royal Society in London, which is involved in high-level scientific research.

The President was responding to a welcome address by Prof John Pethica, vice-president of the society, who referred to Bacon and other pioneers of science.

“As a non-practising sociologist I have always been critical of Francis Bacon but I have decided to leave it till another day,” said the President, to laughter from the assembled scientists.

He didn’t say whether his antipathy to Bacon arose from the Elizabethan’s political activities, his corrupt dealings or his scientific and philosophical endeavours.

The President alluded to one current controversial issue, which encompasses science and politics, when he referred to the damage inflicted by climate change, suggesting that an “ethical discourse” was required to deal with it.

Mr Higgins said that the rapid pace of scientific and technological development and its impact on society posed a great challenge.


‘Reintegration’
“This, I believe, calls for some level of reintegration between science and philosophy. It requires the crafting of a wide-ranging ethical discourse in which all citizens, not just the most expert or scientifically literate among them, are involved,” he said.

“Recent developments in the life sciences, for example, give new salience to the opportunities and perils encapsulated in the old Promethean myth.

“The damages inflicted to our planet by climate change also raise novel ethical questions: indeed, the possibility of the total destruction of our world was not a concern of Enlightenment philosophers.”

Mr Higgins said his visit was a celebration of the relationship between Ireland and the UK “in all of its rich dimensions”.

He pointed out that one of his predecessors as President of Ireland, Eamon de Valera, was elected a fellow of the Royal Society in 1968.

The signature of the former president on the document conferring his fellowship was one of the items shown to Mr Higgins during his visit to the society.

Another item shown to him was a work called Desiderata by the 17th century Irish scientist Robert Boyle, most famous for Boyle’s law.

In this work, Boyle set out a list of desirable scientific advances, including ways to prolong life, immunisation, flying and equipment to allow people to swim under water for lengthy periods.

“The experimental investigations, the spirit of discovery and questioning which made Boyle one of the central figures in the scientific revolution of the 17th century, aptly reflect the particular nature of the Irish genius,” said the President.


Irish contribution
He said that because so many Irish people had succeeded in the worlds of literature and the arts, Ireland’s contribution to science had been overshadowed.

He named some noted Irish scientists, including mathematician William Hamilton; John Tyndall, who explained why the sky is blue; Nicholas Callan, who invented the induction coil; and William Parsons, 3rd Earl of Rosse, who built the world’s largest telescope and discovered new celestial bodies.

The President said discussions were under way between Science Foundation Ireland and the Royal Society on the proposed establishment of a joint programme to support Irish scientists of outstanding potential.

Dr Roche was recently included on a shortlist of 1,058 for a mission to Mars with private space exploration company Mars One.