Concern that marriage between heterosexual couple may have been found unconstitutional 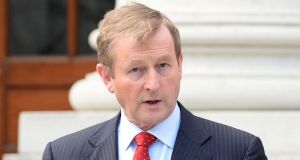 Taoiseach Enda Kenny said he wanted to see a situation where laws and Constitutional amendments were co-drafted rather than subsequently translated into Irish, albeit with consultation. Photograph: Eric Luke / The Irish Times

The Government has changed the Irish-language version of the wording of the same-sex marriage referendum because of a possibility that a marriage between a heterosexual couple might be found unconstitutional.

Taoiseach Enda Kenny confirmed on Tuesday the Irish-language version of the amendment has been changed to bring clarity to the amendment.

The decision was made at the weekly meeting of Cabinet, after Ministers received legal advice and also advice from Irish language experts.

The Government has yet to release the amended version of the Irish translation.

The English version is: “Marriage may be contracted in accordance with law by two persons without distinction as to their sex.”

Directly translated back into English it stated: “A couple may, whether they are men or women, make a contract of marriage in accordance with law.”

The use of the plural created a difficulty in that one interpretation of the wording was that it distinguished only between female couples and male couples, but not between same-sex and heterosexual couples.

A number of senior legal figures with expertise in Irish, including Séamus Ó Tuathail SC and UCC law lecture Seán Ó Conaill, were of the opinion that the translation could give rise to possible confusion.

Government sources maintained that the Irish language used was consistent with precedent, especially previous translations of ‘without distinction as to their sex”.

Speaking outside Government Buildings on Tuesday, the Taoiseach said lessons could be learned from this in future.

Mr Kenny said he would like to see a situation arise where laws and Constitutional amendments were co-drafted (simultaneously in Irish and English) rather than the present situation where the text is written in English and subsequently translated into Irish, albeit with consultation.