Conradh na Gaeilge claims 1,100 new jobs in Gaeltacht could be created through scheme 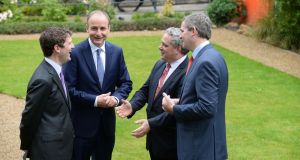 An investment plan backed by Irish-speaking groups has claimed that 1,100 new job opportunities could be created in Gaeltacht areas and through Irish-language enterprises.

The plan, coordinated by Conradh na Gaeilge, calls for an additional investment of €18 million per year to give substance to the plan.

It also called for the creation of a full Oireachtas committee dealing with the Irish language.

The cross-border plan also said that the position of Minister for Communities Dedicated to the Irish Language should be created in Northern Ireland.

In his presentation, Conradh na Gaeilge general secretary Julian de Spáinn pointed to the dramatic reduction in State funding for the Irish language, and for enterprise and development in the Gaeltacht areas of Co Galway, Donegal, Cork, Kerry, Waterford, Mayo and Meath.

The plan calls for additional funding for Údarás na Gaeltachta, a move that it says could lead to the creation of 1,000 additional jobs in places where Irish is the native language.

Among the other initiatives in the plan are the expansion of Irish language networks, support for Irish language centres, the creation of Gaeltacht service towns, scholarship schemes for learning Irish, and an outreach assistance service for parents wishing to speak Irish to their children.

Mr de Spáinn said the investment was very small in the context of the Government’s overall budget, but would have a huge benefit for the language and those communities that try to preserve it.

Fianna Fáil leader Micheál Martin said the Government had downgraded the status of Irish during its term, which was emphasised by the fact that there was neither a Minister nor Minister of State fluent in the language.

Sinn Féin’s Aengus Ó Snodaigh said he would not make any promises but that the plan would have a “friend in court” when his party drew up its manifesto.

He said he supported the plan personally and would be an advocate for it within Fine Gael.

Robert Dowds, of Labour, echoed those sentiments, saying he would be arguing for it to be included in his party’s manifesto.

Niall Ó Tuathail, a Social Democrats candidate in Galway West, also expressed support for the plan, as did the Green Party’s Cormac Manning, of Cork North-West.