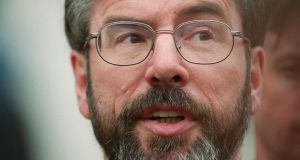 Gerry Adams said Ms Kerin’s refusal to declare her pay “and a general lack of transparency” should be addressed.Photograph: Alan Betson

The Irish Cancer Society has disclosed it lost money on running lotteries over a five-year period, but continued running them because it was in receipt of a State subvention.

The charitable organisation said its cumulative loss was €420,000 between 2009 and 2013 on its fundraising lottery.

However, during the same period of five years, it received €1.2 million from the charitable lotteries scheme, administered by the Department of Justice. The society, in a statement yesterday, said it had been running lotteries since the 1960s, but that the market had changed significantly with the arrival of the National Lottery in 1986.

Like other charities, the society said the scheme had been set up to shield lotteries from the cap on prizes that had been set on them resulting in a competitive advantage to the National Lottery.

Compensated
In its statement, the society asserted that the scheme had compensated it for the loss of income that came with the arrival of the National Lottery, as well as the new rules capping prizemoney for other lotteries. In all, the net gain over the five years was €780,000.

In a statement yesterday, the society said it welcomed full transparency. “Due to the cap on prize funds the profit margin on our lottery has dropped . . . and we have become reliant on annual allocation from the fund.”

Biggest recipient
Some 18 organisations received a total of €6 million under the charitable lotteries fund in 2012. Rehab was by far and away the biggest recipient receiving almost €4 million.

The other big recipients were the Irish Cancer Society, the Asthma Society and the Irish-language group Gael Linn which received €454,000 that year.

In the Dáil this week, Minister for Justice Alan Shatter disclosed the Rehab scratch-card lottery had generated sales of some €4 million in 2012, but its profits were less than €9,500.

Amid expectation in political circles that the organisation will soon be called before the Oireachtas Committee of Public Accounts, Minister for Social Protection Joan Burton said Ms Kerins should reveal her remuneration package.

“I would be absolutely on the record, not just to her, but to other people involved in the charity sector that they should disclose their salaries and their salaries should not be excessive,” she told Newstalk radio.

Sinn Féin leader Gerry Adams said Ms Kerin’s refusal to declare her pay “and a general lack of transparency” should be addressed.

The Government stressed yesterday the next phase of scrutiny of Rehab was for the PAC to handle. Taoiseach Enda Kenny suggested “all charities” would be brought before the committee and would be treated in the same fashion