Ireland’s refugee programme: how will it work?

520 of 4,000 people announced currently being resettled under previous programme 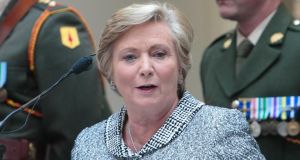 Minister for Justice and Equality, Frances Fitzgerald, said the vast majority of people entering the country are fleeing because of conflict and are “genuine refugees”. Photograph: Gareth Chaney/Collins

The method by which most refugees coming to Ireland will be selected has not been decided yet but will be among the measures to be discussed at European level early next week.

Of the overall figure of 4,000 announced by the Government on Thursday, 520 are currently being resettled to Ireland under a previously-agreed programme.

They were selected by staff from the Department of Justice’s office for the promotion of migrant integration, working in conjunction with the UN high commissioner for refugees, who travels to refugee camps in places such as Lebanon to interview people of various nationalities.

Some 1,200 people have been settled in Ireland in this way over the last decade.

Fewer than 20 of the 520 people have arrived to date and are currently housed at the former Hazel Hotel in Monasterevin, Co Kildare, which is operating as a reception and orientation centre.

They will typically spend three months in such centres where they can receive help with English language and other skills to help them prepare to move into communities across the State.

The 600 people already committed to earlier this year under the proposed EU relocation programme and the additional 2,900 as part of the new Juncker programme unveiled this week are migrants who have already reached Europe.

Many are from Syria and Eritrea and are currently in Italy and Greece.

Officials from the Irish immigration service will be sent to reception centres on the Continent where these migrants are now located. They will work with EU colleagues to select the people who will come to Ireland. According to the Department of Justice, discussions are ongoing over the precise detail of how this will work.

There is uncertainty over whether or not those coming to Ireland have any say in the matter.

While the process has yet to be worked out fully, some working in sector suggest allowing migrants to express a preference about which country they end up in would not be feasible.

The majority of people arriving - a figure of 90 per cent has been mentioned - are expected to be granted refugee status following an asylum determination process.

Some will not, perhaps for security reasons. Minister for Justice Frances Fitzgerald conceded there was a possibility that Islamic State members could attempt to enter European countries under such schemes.

“The vast majority, of course, of people are leaving because of conflict. They are genuine refugees,” she said.

The refugees’ ability to travel outside Ireland will be restricted, as is the case for any refugee across Europe.

Without a national passport, they would require special travel documents from the Department of Justice and other States would probably apply visa requirements.

After five years in Ireland, the refugees can apply for citizenship.

A source said it would be unlikely that Ireland would have the opportunity to select people with particular professions: “They are people in need. This is not a cherry-picking exercise. That would defeat the whole purpose of it.”