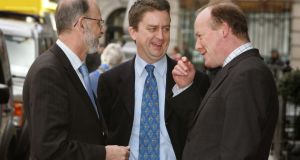 The Iona Institute has said a legal opinion it commissioned on the same-sex marriage referendum found that the ability to distinguish between same-sex and opposite-sex couples in adoption cases will be “wholly undermined” if it passes.

The organisation, which is campaigning for a No vote in the marriage referendum on May 22nd, has argued that a Yes vote would mean “profound changes” in how the family is viewed under law.

Mr Quinn said the opinion was confined to an analysis of the legal implications of the proposed amendment and did not express any view on the merits of the amendment itself.

The authors had provided the opinion to their client, the Iona Institute, for its sole use.

“It shows that any ability to lawfully distinguish between same-sex and opposite-sex couples for purposes such as adoption etc will be severely and probably wholly undermined,” Mr Quinn said.

“In other words, if Article 41 is changed as is proposed, it would become constitutionally more difficult to reflect in our laws the view that married men and women are different from two married people of the same sex in matters concerning the raising and welfare of children.”

The cabinet in February approved the Children and Family Relationships Bill, allowing for adoption by same-sex couples. The bill subsequently became law.

Mr Quinn said the recently-passed Children and Family Relationships Act permitted same-sex couples to adopt and use assisted human reproduction on the same terms as married men and women, “despite the fact that two men or two women can never give a child a mother and a father”.

He claimed the proposed Constitutional amendment, if passed, would make it harder for a future Government to reverse aspects of the Children and Family Relationships Act.