Big Tom sang with a ‘happy kind of sadness’ 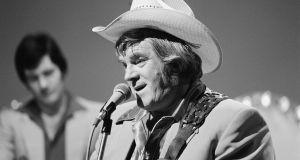 The Gentle Giant from Oram, just outside Castleblayney, Co Monaghan walked tall on the Irish landscape. When news came through of his passing, tears flowed freely. My friend of a lifetime had crossed the Great Divide.

Growing up in rural Mayo in the late 1960s and early 70s, I fell in love with country music and especially Big Tom and The Mainliners. The great Larry Gogan presented their sponsored programme on Radio Éireann after 11pm for some time and the legend of Big Tom and the band soon spread around the country and across the Irish Sea.

It was in the Royal Ballroom in Castlebar, Co Mayo that I first saw and met Big Tom and The Mainliners. I was introduced to Tom that night by a neighbour and friend, Martin Regan, who still lives near Kiltimagh. It was the start of a friendship that has endured faithfully and without blemish all through the years.

Born in the heart of Patrick Kavanagh country, the famous poet from nearby Inniskeen, Tom always reflected the heart and soul of this drumlin countryside. Like Kavanagh, he too knew about his hills never seeing the sun rising, eternally some of them looking north towards Armagh.

Like another great poet and singer, Hank Williams, Big Tom took his influences from “down home”. He was shaped and moulded by the people from this rolling land whose earthy qualities anchored him to this corner of Monaghan.

Tom was always the quintessential country man who was most at home on the land or, for many years, pursuing one of his favourite hobbies of fishing.

He supported his home clubs of Oram and Monaghan with a passion, the blue and white flag of Monaghan flying proudly in the garden. It his early 20s, he donned the county jersey on a number of occasions.

The song Gentle Mother, first performed by Tom on The Showband Show on RTÉ, launched the career of the man that went on to attain iconic status in country music. The other six members of The Mainliners were Henry and Seamus McMahon, John Beattie, Ginger Moran, Ronnie Duffy (a brother-in-law of jazz maestro Paddy Cole) and the late Cyril McKevitt. They all came from within a few miles of each other.

Soon Big Tom and The Mainliners were packing halls and marquees not just around Ireland but also over in England where Tom was mobbed by adoring fans. On one occasion, they had to bring in the mounted police such was the crowd that gathered outside the Galtymore Ballroom in Cricklewood.

Irish people who worked in London during that era and throughout the 1970s will recall with affection that the most common sound emanating from flats and bedsits in Camden, Kilburn and Cricklewood were the songs of Big Tom and The Mainliners, many of which were penned by the late great Johnny McCauley, including Four Country Roads and Back to Castleblayney.

Three number one hits in the Irish charts, Old Love Letters, I Love You Still, and Broken Marriage Vows, saw Big Tom and The Mainliners lead the posse by a country mile.

In 1975, Tom and The Mainliners parted company for a decade or so and he fronted a new Monaghan band, The Travellers. By then I was working with the Bank of Ireland in Abbeyleix and was in the Dreamland Ballroom, Athy, in 1975 on the night Big Tom started his new career with The Travellers.

One of the great highlights with The Travellers came in 1979 when they headlined the big London-Irish Festival in Roundwood Park in London before a crowd of 84,000 people.

Around 1980, I left the bank and spent about eight months in Castleblayney working with the Tony Loughman-owned magazine, Entertainment News. Evenings spent out in Oram with Tom and Rose remain ingrained in my memory, including occasions I accompanied him on fishing trips to a small lake in south Armagh.

Tom T Hall from Kentucky, once described by President Jimmy Carter as the “Poet Laureate” of American country music, had a special time for Ireland’s country icon. “When I was in Nashville a few years ago, the only Irish singer that Tom T Hall enquired about was Big Tom McBride.

Tom often told me that he never recorded a song that he did not appeal to him. “If you don’t ‘feel’ a country song, don’t sing it.” He had a unique ability to sing songs that he often described as a “happy kind of sadness”. The feeling was in the voice, the outreach was to the heart, and Tom always managed to touch base.

The fondness and affection for Big Tom was probably unparalleled in Irish showbiz history. Hearts melted in his presence. Summers came and summers went but the fascination, respect and absolute regard for this Monaghan man’s place in country music history never once diminished.

He was the first recipient of the RTÉ Country Music Hall of Fame and The Farmers Journal Country Sound Hall of Fame. There could be no other for the accolade but Big Tom.

He was the man with a huge sense of place and an abiding love for his neighbours and friends around Oram and Castleblayney. “Around the old Hope Castle where so often I did roam/I dream of Castleblayney, my own people and my home”.

Like Australian singer Kevin Johnson captured the essence of an earlier era in his classic song, Rock & Roll I Gave You All The Best Years of My Life, Big Tom certainly gave countless thousands some of the best years of our lives too.

The passing of his beloved wife Rose at the end of January impacted hugely on him. It was impossible not to remember the great bond between Johnny Cash and June Carter. When June died, Johnny lost the will to live and he died just six months later.

Tom and Rose were a special couple and we always loved spending time in their company. His last public concert performance was at my annual weekend in the Salthill Hotel in Galway back in November and the last song he performed was a duet with Margo O’Donnell, A Love That’s Lasted Through The Years.

It was followed by the inevitable standing ovation and rousing cheers as Tom tried to navigate his way through the surging and adoring fans. In every sense of the word, he was going out the same way he came in: A true legend.

Big Tom was my hero, my legend. He was part of the fabric of life on this island for over five decades. He was the man who had the ability to touch the heart of rural Ireland like no other. The most humble man in the business, the most loved Irish singer in the hearts of all who ever enjoyed real country music here in Ireland, the man who never changed, who was always himself, plain and down to earth Tom McBride.

I was so privileged to have the honour of introducing him and the band on stage so many times as well as hosting that unforgettable night when Irish TV recorded a three hour special tribute to Tom in the Glencarn Hotel in Castleblayney.

Like thousands and thousands of people, I loved Big Tom as a person, for the incredible joy he brought to our lives. He was such a part of the soundtrack of our lives. He was, and always will be, our King. There will never be another like the great Big Tom McBride.

Michael Commins is a broadcaster and journalist