In what direction should the new leader take the Labour Party? 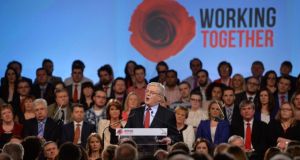 ‘Labour is transfixed on “office” (ie ministerial office), insisting, against all the evidence, that only in “office” can it serve the interests of those who depend on it.’ Above, Eamon Gilmore, giving the party leader televised address at the end of the Labour Party Conference in February. Photograph: Alan Betson/The Irish Times

The Labour leadership candidates should be careful about talking of the “core values” of the Labour Party to which they want the party to return. For Labour never had “core values”, right from its inception and throughout its history, aside from two brief dalliances with socialism, after which it resumed fidelity to whatever was the prevailing orthodoxy.

James Connolly was instrumental in the foundation of the Labour Party in 1912 but his socialism hardly infected the new party at all, nor was the new party infected by much vitality. It stood aside in the 1918 election, was a bystander in the War of Independence and didn’t know which side to take in the Civil War. It went on to vacillate in the 1920s in its opposition to the repressive policies of the Cumann na nGaedheal regime.

When Fianna Fáil came into the political fray in 1927, Labour could hardly distinguish itself from it, and that carried through to the early 1930s when it supported minority Fianna Fáil governments.

It entered the Fine Gael-led coalition government in 1948 and deferred unashamedly to the Catholic bishops in 1951 over the Mother and Child Scheme. Its longest-serving leader, William Norton (1932-1960), and his successor, Brendan Corish (1960-1977), were both members of the Knights of Columbanus. It participated again in government from 1954 to 1957 and shared in the public’s odium in the 1957 election when it lost six seats.

A leftish breeze that blew in the heady 1960s in church and State lifted Labour somewhat electorally and shifted it somewhat ideologically. For the first time in 30 years it talked of socialism and promised never to enter coalition government again unless it was the lead party. It half expected that to happen in the 1969 election, buoyed on by the recruitment of “celebrity” candidates.

When that didn’t work out, the coalition commitment evaporated and so too did talk about socialism. This facilitated participation in another Fine Gael-led government from 1973 to 1977, with predictable consequences to it and to the country.

After every one of these periods in office the Labour Party suffered the disapprobation of the electorate, and in each instance the condition of that sector of the electorate Labour purports to care most about worsened, at least vis-a-vis the rest of society. But never did the party think it appropriate to evaluate its performance in office and the consequence of its participation or think through what its role was in Irish politics. It merely focused on getting into office again ASAP.

This prompted it, for instance, to be the first out of the traps in the 2007 election campaign to promise tax cuts and cuts in stamp duty, which would have further inflated the bloating property bubble. It prompted the notorious promises of the last (2011) election campaign on child benefit, water charges, “Labour’s way or Frankfurt’s way”, and the rest.

Labour is transfixed on “office” (ie ministerial office), insisting against all the evidence that only in “office” can it serve the interests of those who depend on it. But surely they appreciate now that this is false and can never be otherwise unless the political culture changes.

This can be defeated only by a counter-hegemony, by persuading people of the insidiousness of the prevailing ideology that privileges hugely a wealthy elite and privileges the upper middle class strata, enforcing exclusion and powerlessness on the rest. Labour is not interested in that exacting endeavour.

Maybe in this leadership contest at least the candidates might be forced to think through what the Labour Party is for; why, after its previous periods in office, was there greater inequality than there had been before (or at least no appreciable decline in inequality); whether this matters to what Labour is about; and what the candidates think Labour should do now?