Analysis: Focus now on Gilmore, reshuffle and Programme for Government 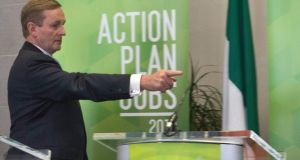 It is now clear that these elections greatly increase the political stakes for both Coalition parties. Although Labour has taken the brunt of an unforgiving attack by voters, the implications for Fine Gael are no less serious.

Attention will now be fixed on three pressing matters: Eamon Gilmore’s position as Labour leader; the looming Cabinet reshuffle; and the remoulding the Programme for Government. These questions are already in play and assertive action is required to put them to bed. While they are likely to be settled within weeks, the Coalition’s composure and cohesiveness is on the line.

On a longer horizon, but more crucially, is the matter of the 2015 budget in October. This, more than anything seen in the immediate fallout from the local and European, will be the ultimate test of the Government’s stability. After a lamentable succession of missteps and mistakes since the start of the year, the Government has received a strident warning from the people that their endurance of fiscal pain has limits.

With Sinn Féin already in possession of scores of new council seats, the jolt delivered on Friday by an unhappy electorate has sent shockwaves through the political system at large. For Labour, however, the blow is every bit as severe as feared during the campaign.

This has left Fine Gael TDs in a state of wonderment as to what exactly happens next within the junior Coalition party. Having invited valid questions to its basic competence as an administration, the Coalition is now feeling the scorching heat of direct political pressure from the people. The magnitude of the blow is not lost on Taoiseach Enda Kenny, who has publicly accepted that Friday was “not a good day” for his administration.

We simply do not know at this point whether Gilmore’s command of his party will be challenged. The sense remains that the Tánaiste has been bracing for the possibility of an internecine attack and is determined to confront head-on any attempt on his leadership.

With a wipe-out in the European Parliament in train and a huge volume of council seats sacrificed, the cold truth now for Labour TDs is that there is a serious threat to their Dáil seats come the general election.

The question to be raised is whether they would fare any better under new leadership. Although Minister for Communications Pat Rabbitte declared that John the Baptist would not have delivered any better result for Labour this time out, the outcome still merits serious reflection at all levels in the party.

Minister for Social Protection Joan Burton is the most obvious pretender to Gilmore. But she is still considered unlikely to mount a direct challenge herself. More likely, therefore, is that the question would be raised first from the back benches or junior ministerial ranks. Burton might well prefer a clear run at the leadership but she has enemies within the Labour ranks of the Cabinet and, indeed, on the back benches. So a coronation is unlikely. If that means there is a battle, then any contenders will have to set out terms for Labour’s engagement in Government with Fine Gael. That is tricky, given the strict fiscal parameters within which the Government is operating.

Yet even if there is no challenge, it seems obvious that Gilmore will have to account for the torrid performance and set out a plan to arrest the party’s decline.

In respect of the reshuffle, Gilmore is angling for a domestic portfolio. He will clearly get that if he survives as leader, but this raises further questions as to whether there is a new division of portfolios held by both parties. Labour has designs on the Richard Bruton’s Jobs and Enterprise ministry, but Fine Gael will not lightly yield that.

There are questions too for Fine Gael, primarily over Dr James Reilly’s troubled command of the Department of Health. It’s an open secret that Labour wants Dr Reilly out, but so too do many Fine Gael TDs. The problem for Kenny is that the Minister for Health is deputy leader of Fine Gael. While he must therefore be handled with care, the Taoiseach’s disposal of Alan Shatter and Frank Flannery demonstrates a certain ruthlessness. There is also the matter Phil Hogan’s difficult tenure in the Department of Environment. The expectation remains that Hogan will soon be on his way to Brussels to become Ireland’s next European commissioner.

The bottom line is that the setback delivered on Friday is now likely to result in a more radical reshuffle than might otherwise have been the case. This is not without risk for Kenny, however, for every promotion to ministerial office leaves disappointment in its wake on the part of the overlooked.

Then there is the Programme for Government, which is largely implemented. The document is now likely to be recast, with an immediate concentration on measures to ease the burden of the medical card review. While the assessment of entitlements had some logic, the effort was badly managed. Complaints about official letters asking whether cardholders were still suffering from incurable diseases and permanent disabilities simply ate into the Government’s credibility.

The higher focus, however, is on the hard road to increased disposable income. To gauge from election rhetoric by both Fine Gael and Labour, the objective is to lower the threshold at which the higher rate of income tax kicks in. Doing that in practice, however, is decidedly difficult.

This brings neatly to Budget 2015, for that is where the Coalition will have to come good on any promises set out in a renewed Programme for Government. The difficulty here is Fine Gael and Labour remain bound by a legal obligation to European partners achieve a budget deficit of less than 3 per cent next year.

Opinions vary as to whether that requires a €2 billion retrenchment - which seems a political impossibility right now - or no more than the €500 million proceeds from the new water tax. Either way, it will be a huge challenge to deliver an appreciable uplift in take-home income whilst seeking a marked reduction in the deficit.

In all likelihood, however, this is where the forces unleashed on Friday will be brought to bear. If there is little appetite now in Labour to cut and run, the calculation of the next budget may raise existential questions for the Coalition. For both Kenny and Gilmore, will require political skills of the highest order to navigate all these challenges in coming weeks and months.

1 Coronavirus: What will reopen in Ireland’s phases to ease restrictions?
2 Coronavirus: No new Covid-19 deaths reported in State for first time since March
3 Swimming ban at Dublin's Merrion strand due to poor water quality
4 Unconvincing account may take some heat out of Dominic Cummings controversy
5 Next government could bring in work-from-home tax incentives – Taoiseach
Real news has value SUBSCRIBE