Hundreds attend protest against Trump at US embassy 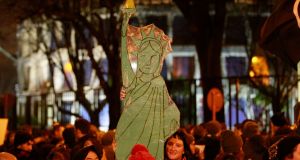 Lady Liberty in the rain at the embassy in Dublin as the United Against Racism demonstration against Donald Trump’s travel ban took place outside the US Embassy. Photograph: Nick Bradshaw

Hundreds of demonstrators encircled the US embassy in Dublin on Thursday evening in protest against president Donald Trump.

Battling rain and high winds, the demonstrators held aloft banners and chanted in defence of human rights while speakers voiced their opposition to the Republican’s regime.

The major disagreement was with Mr Trump’s executive order banning arrivals from seven Muslim-majority countries and placing a four-month moratorium on refugees entering the country.

“As we learned last week, your whole life can change with the stroke of a pen,” said Thawab Shibli (26), a US citizen who emigrated there from Syria. “It’s really devastating; when the US messes up the whole world is affected.”

Ms Shibli, who has been working in Ireland for two years, said some of her extended family who had fled to Saudi Arabia from Damascus had intended to join her parents in New York. “No one has that hope currently. And we don’t know what else Trump is going to do. This is just the start.”

The speakers and crowd also denounced a number of the new president’s comments and policies on matters such as LGBT rights, the proposed border wall with Mexico and a perceived determination to foment fear and hatred.

“No Hate, No Fear” and “Tear Fascism Down” were among the slogans on banners and placards dotted through the crowd.

Breffiny Leeson, an Irish Montessori teacher who spent 15 years in the US and who voted in the election, brought her six-year-old daughter, Saoirse.

“I really think that peace begins and tolerance begins right from childhood. Their little minds are sponges,” she said.

Sarah Hamid, a Muslim from Pakistan who grew up in Germany, said she had come as “folks are trying to spread fear and hatred and oversimplify things”.

“This is our chance to step up and speak up,” she said.

Chris Boyd, from Texas, told the crowd the new president “does not represent me” and described similar but far larger protests across the US.

Meanwhile, peace and anti-racism groups turned out at Shannon Airport in protest at the immigration ban. Shannon is home to one of the two US pre-clearance facilities in the State, and has been used by US military aircraft over the years. About 120 people attended the demonstration.

Security was stepped up ahead of the protest with gardaí­taking up posts at the entrance to the airport and airport police officers erecting security lighting and patrolling the airport’s perimeter.

A second cordon was set up along the airport road to ensure no protesters attempted to reach the terminal building, where organisers had hoped to hand in a letter to airport management.

“US immigration pre-clearance at Shannon Airport is currently implementing the ban, despite the fact that it puts Ireland in breach of Irish and EU anti-discrimination laws,” John Lannon of the Shannonwatch protest group told the demonstration.

Edward Horgan of the Peace and Neutrality Alliance and Veterans for Peace called on Taoiseach Enda Kenny to sign his own executive order.

“US military cargo planes, troop carriers and refuellers are being allowed to come and go at Shannon, while people fleeing from the wars they are fuelling are being denied entry into the US at Shannon and Dublin. This is indefensible in a country that claims to be neutral and to respect human rights,” he said.