‘Huge’ social housing plan to be pushed - even if protested 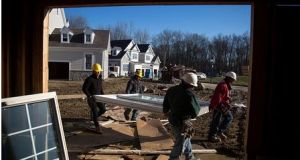 Minister for Housing Simon Coveney told the Dáil Housing and Homelessness Committee: “We cannot have a situation where some communities block social housing in their area because they don’t want it.” File photograph: Getty Images

The Government has committed to accelerating a “huge” programme of social housing, with the new homes to be built alongside private houses, even if this provokes protests.

Minister for Housing Simon Coveney said the Government was determined to avoid the “mistakes of decades ago” that saw “huge swathes of urban areas” given over to purely social housing. Instead, he said, the Government would enforce a mixture of public and private housing.

He acknowledged this would be “not popular in some areas”, but it was the right thing to do.

“We cannot have a situation where some communities block social housing in their area because they don’t want it,” he told the Dáil Housing and Homelessness Committee on Thursday.

Expanding on the Government’s housing strategy to The Irish Times, he said a majority of private houses built with the assistance of the State must be priced below €300,000 or be offered for rent at discounts to the normal market rate.

In certain circumstances, he said, the Government would help private developers to build homes by reducing their costs. This could be done by bringing down the cost of accessing finance for builders or reducing the costs of infrastructure associated with construction, such as access routes into estates.

Mr Coveney, however, said that in circumstances where the State facilitated cheaper home-building, it would be the Government’s aim that most of those homes and apartments would be affordable.

The Minister also highlighted the possibility of public-private partnerships or, for example, councils or State agencies giving over a portion of land for development. In such scenarios, where the homes were put on the rental market, the Government was examining a so-called “cost-rent” model, where the rent was at a discount. Mr Coveney said this could be at 70 per cent of the market rate.

On the so-called Part V requirement that a minimum of 10 per cent of new homes should be social and affordable housing, Mr Coveney said that housing agencies or other agencies could offer upfront payments to developers.

The Government was also examining a temporary cut on the VAT paid on new homes and apartments from 13.5 per cent to 9 per cent.

Mr Cowen was critical of the EU’s fiscal rules, which he said “prevent the Government from spending the extraordinary amount of money that is needed”.

Mr Coveney told the Dáil housing committee tens of thousands of new social housing units planned for the coming years must be integrated with private accommodation to establish a mix of housing types in towns and cities.

The committee will produce a report on the housing crisis and proposed solutions in the coming weeks, which will inform the housing strategy that Mr Coveney has said he will complete over the summer.

It is likely to be published at the end of August, and will serve as the Government’s action plan for addressing the housing shortage.

Mr Coveney said that while the deadline for the housing action plan was mid-August, it was likely to be delayed until the end of August due to summer holidays.

1 Funeral of John Hume: Tributes paid to peacemaker who held ‘deep conviction in the power of dialogue’
2 Irish in Canary Islands: Life has changed dramatically
3 Fresh investigation into the murder of Michaela McAreavey in Mauritius
4 Pubs to stay closed until September at least as restrictions tightened significantly
5 NPHET calls for ban on non-essential travel from countries with high Covid-19 rates
Real news has value SUBSCRIBE