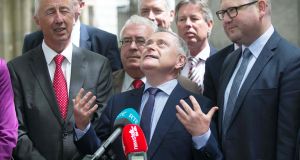 Mr Howlin insisted there was no basis to speculation about an arrangement with his counterpart Micheál Martin and that Labour was “going to work with everybody”.

There is concern in Fine Gael that the two parties had done a deal with each other on important motions.

“In the new dispensation that is so-called new politics we will work with every progressive force that wants to advance progressive issues,” he said.

Fianna Fáil had last week been anticipated to abstain in a Labour motion on workers’ rights. However, the party voted for the motion forcing the Government to suffer its first defeat.

The party leader unveiled his shadow cabinet yesterday with the portfolios of health and jobs allocated to Alan Kelly.

Former leader Joan Burton was designated finance and education spokeswoman, former minister for education Jan O’Sullivan will shadow the Minister for Children and Minister for Housing, Planning and Local Government.

Seán Sherlock will be spokesman on communications, climate change and natural resources and spokesman on public expenditure and reform.

“Today, I am also writing to all 50 Labour councillors. They too will be asked to share in the leadership of our party,” Mr Howlin said. Elected representatives and the broader membership “across the length and breadth of the country will begin working to revive a radical policy agenda for the party”.