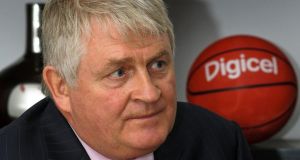 A High Court hearing over a temporary injunction preventing RTÉ from reporting on Denis O’Brien’s banking affairs has been adjourned. Photograph: Reuters.

A High Court hearing over a temporary injunction preventing RTÉ from reporting on Denis O’Brien’s banking affairs has been adjourned.

Lawyers for RTÉ and Mr O’Brien returned to the High Court on Friday morning, where the broadcaster was expected to seek further changes to an injunction preventing it from airing a report the businessman’s banking affairs.

The temporary injunction was granted last month pending a full hearing of an application by Mr O’Brien seeking to prevent RTÉ from broadcasting information about his bank dealings with the Irish Bank Resolution Corporation (IBRC).

Mr Justice Donald Binchy clarified on Tuesday that the injunction was not intended to block RTÉ, The Irish Times and other media from reporting comments made by Independent TD Catherine Murphy in the Dáil about Mr O’Brien’s financial affairs.

At the same hearing, Michael Cush SC, for Mr O’Brien, told the court he would be making an application to vary the order the judge had made so as to allow for the reporting of Ms Murphy’s remarks.

While welcoming that, however, David Holland SC, for RTÉ, said the difficulty RTÉ found itself in was that Mr Cush’s offer was very limited. “For all we know there may be many more utterances ... we can’t come in to court every time.”

Mr Holland indicated that RTÉ would therefore seek to have the court vary the order to allow the broadcaster report on any further comments made in the Oireachtas on matters covered by the injunction.

The matter has been adjourned until next Wednesday.

Eating out in Dublin – the homeless way 01:40
School closures over strike set to be greater than anticipated 01:00
Fianna Fáil candidate served as director despite court order 00:54
FG and FF back transition payment for persons retiring before to right to State pension 00:10
Lobby to press politicians over referendum on right to home 00:05
SUBSCRIBER ONLY