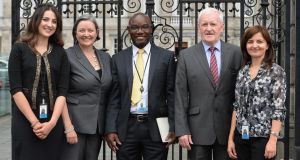 Ireland is not the only country with an ambivalent attitude to its first language. Larysa Karankovich points to a similar problem in her home country of Belarus, where just 25 per cent of the population, mostly in the regions, speak Belarusian daily but “everyone speaks Russian”.

Now an Irish citizen, Karankovich is one of four immigrants, who have spent the past six months working part-time for TDs in the Oireachtas, looking at the issues of the day, as part of the Crosscare migrant project, an information and advocacy project for immigrants.

Crosscare is the social support agency of the Dublin Archdiocese and runs the intern programme to help enhance immigrant integration in Irish society and participation in the political system.

Migrant project policy officer Joe O’Brien said many immigrants who are not citizens are unaware that they can vote.

“We want to demystify the whole political system for immigrants,” he said. Many come from countries where politics is viewed with fear and as exclusively for the rich. Crosscare wants to show them that “the political system is for them”.

Crosscare looked at the Westminster system where interns shadow MPs but introduced a more interactive scheme in 2012 where high-achieving interns go through a rigorous recruitment and interviewing process. Twenty have been involved in the scheme to date. “We pick those well connected in their community or interested in getting involved long-term in politics, though that’s not a requirement.”

Karankovich is interested in the non-governmental-organisation sector. Noting the similarities in the language debate, she also highlights other comparable international issues, including undocumented workers. It is estimated there are 50,000 such Irish workers in the US but there are similarly affected immigrants in Ireland, believed to be in the thousands although there is no official figure.

“It’s been great to be in the Dáil when the work permit system was being discussed and to see how the politicians as policy-makers, view it,” she said.

The 34-year-old had a positive work-permit experience with her employer but knows many others who had major problems and welcomes the decision to offer bridging visas for immigrants who previously had work permits.

“Generally people’s attitudes to migrants are very good compared to other countries,” she says. Ireland’s emigrant experience is a contributory factor although sympathy for migrants has dropped since so many Irish are forced to emigrate themselves.

Karankovich came to Ireland for a “gap year” after she finished her college course in Russian, Belarus and English in 2003. She says her future will be in Ireland.

Sheelan Yousefizadeh (22) moved to Ireland with her family from Tehran when she was 12. Now on a “gap year” from her degree course in genetics at TCD and interning with Fine Gael TD Marcella Corcoran Kennedy, she also works in Trinity’s Science Gallery, has co-presented a programme on community radio, helps run the annual Iranian New Year (Ruz) festival and established an annual Iranian film festival here.

Yousefizadeh believes she was fortunate because the school had a high proportion of migrants whose backgrounds were celebrated through events including international days. The lesson she learnt at school: “Be happy to be different, not forgetting where you came from.”

She also believes that as interns “we can be a good model for immigrant kids”.

Ebisinbofa Charles Titus, known as Charles, had an even more in-depth experience, going out on the canvass in the Ireland South European parliament election for the subsequently successful Fine Gael candidate Deirdre Clune, while he interned for her director of elections, Cork North-West TD Michael Creed.

From Nigeria, he came to Ireland in 2001 and he has a law degree from the University of Limerick as well as a masters.

Commuting from Kerry to Dublin each week for his Dáil work he is also studying for the entrance exams to train as a solicitor and runs a car-valeting business with his wife. He particularly enjoyed the research work on everything from the judicial appointments process to legislation on alcohol and policy around health rights.

Titus, also an Irish citizen, said: “I never realised the workload TDs have, between their legislative work and representing their constituents.”

Each intern highlighted that 12 per cent of the population is immigrant. Titus adds that they account for a lot of votes and he calls for “political will to embrace diversity”.

Michael Creed enjoyed the intern experience, particularly the different outlook. “Charles . . . was not shy in challenge the conventional wisdom on issues”.