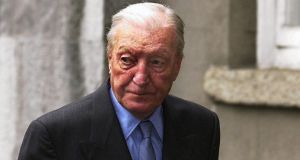 Former taoiseach Charles Haughey: wrote to stud owner in January 1980 to say how pleased he was to learn of the owner’s generous offer

The 900-acre Kildangan Stud in Co Kildare was offered to the State more than 30 years ago, but the matter dragged on through the life spans of various governments and the stud was eventually sold privately.

Files released by the Department of the Taoiseach show that the Department of Agriculture was asked to pursue the bequest offer in June 1983, four years after the stud’s owner, Roderic More O’Ferrall, offered the property to the State.

In a letter in November 1979 to then taoiseach Jack Lynch, More O’Ferrall, who was 76 at the time, said he would like it to be incorporated into the National Stud. He described his estate as including “an attractive and very well maintained stud farm”. He did not wish the contents of his letter to be broadcast “for a long time to come”.

In a letter dated January 1980, new taoiseach Charles Haughey wrote to More O’Ferrall to say how pleased he was to learn of the “generous decision”. He said he and his wife Maureen would visit as soon as possible.

‘Exchequer liabilities’
However, then minister for finance Michael O’Kennedy was not as enthused, suggesting in a letter to Mr Haughey that the acquisition could only result in “heavier exchequer liabilities” and would have “no obvious benefit to the horse breeding industry”. He suggested the land could be sold to establish an endowment fund in

After changes of government, in June 1982 then minister for agriculture Brian Lenihan wrote to Mr Haughey to say officials had visited the stud and found there were some legal issues with title. He suggested More O’Ferrall be asked to appoint a solicitor with whom the Office of Public Works could resolve the issues. Mr Haughey agreed.

However, nothing happened. A note on the file dated June 1983 and written to the OPW says “for reasons which it has not been possible to unravel, this [Haughey’s] reply did not percolate to official level”. It suggested the OPW “establish that the offer by Mr More O’Ferrall still stands”.

In March 1983, when Tulira Castle at Ardrahan in Co Galway, owned by Lord Patrick Hemphill, was on the market for £400,000, master of the High Court PJ Lindsay wrote to then taoiseach Garet FitzGerald asking him to speak to Lord Hemphill about the purchase of the castle. Mr FitzGerald declined the meeting. An internal memo noted the castle “is of no architectural merit”.