Fears of Green split over issue of coalition government 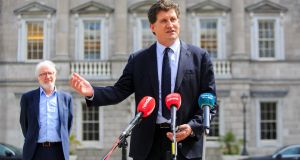 The Green Party is to enter negotiations on a programme for government with Fine Gael and Fianna Fáil.

The Greens held a parliamentary party meeting by teleconference this afternoon which approved the move, clearing the way for formal negotiations to begin later this week.

In a statement the party confirmed the move saying it would “now work with Fianna Fáil and Fine Gael to develop a deal that respects our mandate with a view to presenting that agreement to Green Party members for approval.

It notes that a two-thirds majority among members is needed for approval.

“Any proposal must be transformative on climate action and commit to strong progress towards a more sustainable and fairer society,” it said.

If this is not the case, it says, “Green Party representatives will withdraw from negotiations and pursue their mandate in opposition and work to hold the government to account.”

Green Party leader Eamon Ryan will now seek a meeting with the Fianna Fáil and Fine Gael leadership to start the process.

Mr Ryan, who has been in constant contact with the Taoiseach and Fine Gael leader Leo Varadkar and the Fianna Fáil leader Micheál Martin, sought clarifications and additional commitments from the two parties to help secure the assent of his parliamentary party to enter talks on a new government.

It is understood that these involved stronger commitments on some issues, and technical clarifications on others.

The Irish Times understands that Mr Ryan received another letter from the two party leaders this weekend, which he brought to the parliamentary party and tabled the proposal to enter talks.

Mr Ryan had the support of a clear majority of the parliamentary party for the move, but there was significant opposition expressed. There were fears in the party this weekend of a split over the question of government.

Negotiations are likely to commence between representatives of the three parties in the coming days on a programme for government. Sources say these are likely to take much of the rest of the month, with the party leaders then seeking the endorsement of their parties to enter government on the basis of the document.

This would mean – if the parties approve – that a new government formed in mid-June at the earliest.