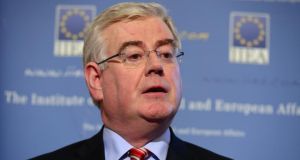 The Government is to reopen the Vatican Embassy, The Irish Times has learned.

The Government has decided to reopen the Irish Embassy to the Vatican as part of a wider expansion of the embassy and consulate network.

Tánaiste Eamon Gilmore received approval from his ministerial colleagues to open new embassies and consulates at the weekly Cabinet meeting this morning.

The list includes reopening the Vatican Embassy, as well as new Embassies in Bangkok, Jakarta, Nairobi and Zagreb and Consulates in Austin in Texas in the US, as well as in Sao Paulo in Brazil, and Hong Kong, China.

The Vatican Embassy will be housed in a separate building to the Irish Embassy to Rome, which is now housed in the Villa Spada, which housed the old Vatican embassy.

The Department of Foreign Affairs said new “modest” office accommodation will be found. Only one diplomat will be required to staff the new Embassy, and its focus will be on development aid.

Sources said the decision is a recognition of the change in papacy, and Pope Francis’s focus on overseas aid.

Mr Gilmore made the decision to close in embassy in November 2011 as part of cost-cutting measures. The embassy to Iran was also closed at the time, as was a representative office in Timor Leste.

At the time, Mr Gilmore said the Government was obliged to implement cuts to meet targets set out in the EU-IMF rescue programme.

However, Mr Gilmore today said: “Over the past five years our diplomats have been tasked with the frontline role in restoring Ireland’s once-tattered reputation abroad, and in championing our economic cause.

“And they have been hugely successful in doing that - both in European capitals, influencing key decisions at European Council level, and in major cities, organisations and political capitals around the world.”

He said the decision to expand the embassy network is part of a “drive” for economic recovery. “It will equip Ireland to take advantage of emerging opportunities and will provide certainty for business that resources will be in place to support them in key markets and regions. In short, it is an investment in the future of our country.”

The cost of the new Embassies and Consulates will be around €4.7 million annually, and their size will range from one to three diplomatic staff.

However, Ireland’s Embassy in Lesotho will close, with the Embassy in South Africa assuming its responsibilities. The Irish Embassy in Vilnius, Lithuania, will also be “downsized” and the Irish Aid office in Freetown, Sierra Leone, will be upgraded to Embassy status.

Fianna Fáil spokesperson on Foreign Affairs Brendan Smith welcomed what he described as the Government’s U-turn.

“I’m glad that the Labour Party has been forced into this U-turn. The reasons given for closing the embassy in the first instance were completely bogus and it was a mistake,” he said.

“Like so much with this Government, the primary consideration is PR and spin. They closed the Vatican Embassy when they thought it would be popular and now they are reopening it when they think it might be popular.”